If you've ever entertained those questions, you've engaged with some of the most pressing mysteries of physics. And you might want to turn to Instagram for more information. 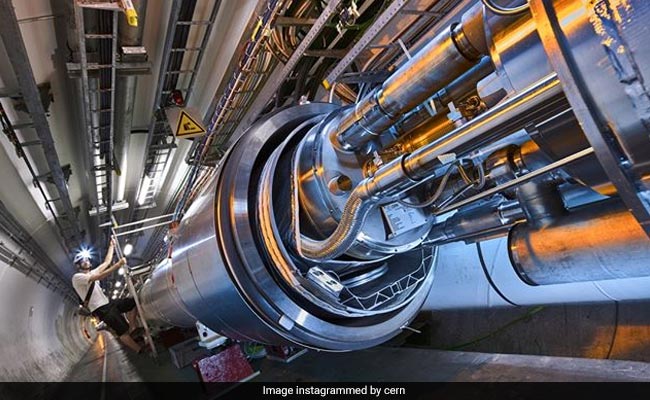 Are there parallel universes? What is dark matter? What is matter, for that matter?

If you've ever entertained those questions, you've engaged with some of the most pressing mysteries of physics. And you might want to turn to Instagram - yes, Instagram - for more information.

It turns out that the social media network is packed with great science photos, and the granddaddy of all labs, CERN, also runs a behemoth of an Insta feed.

The world's largest particle physics lab, CERN is home to the Large Hadron Collider, a mammoth particle accelerator that is surprisingly photogenic.

Located in a 17-mile-long tunnel deep beneath the border of France and Switzerland, the LHC has high-energy particle beams crash into each other at nearly the speed of light. Researchers hope that by studying what happens next, they can eventually resolve big physics mysteries, such as whether there are an infinite number of parallel universes out there, why there's so much dark matter in the universe and what it's made from, and whether particles have invisible "partners" that might help explain weird inconsistencies in the Standard Model of particle physics. (The Standard Model is the best description so far of the particles that make up the universe and how they interact.)

The LHC is offline because it's being upgraded by scientists, but that pause is photography's gain. The Instagram feed is filled with photos of the upgrades to the particle accelerator. Its colorful components are paired with commentary that helps you understand what you're looking at. It's a way to visit the far-off atom smasher without putting down your phone.

CERN's feed isn't all devoted to the LHC. Historical images are available, too, as well as posts highlighting the work of its international scientists. The behind-the-scenes view of scientific ambition is worth a follow.

(Except for the headline, this story has not been edited by NDTV staff and is published from a syndicated feed.)
Comments
Large hadron colliderCERNInstagram