The military branch, started under former president Donald Trump, is working with government contractor SAIC on a gamified training platform that allows employees to interact with full-scale digital replicas of national security satellites. 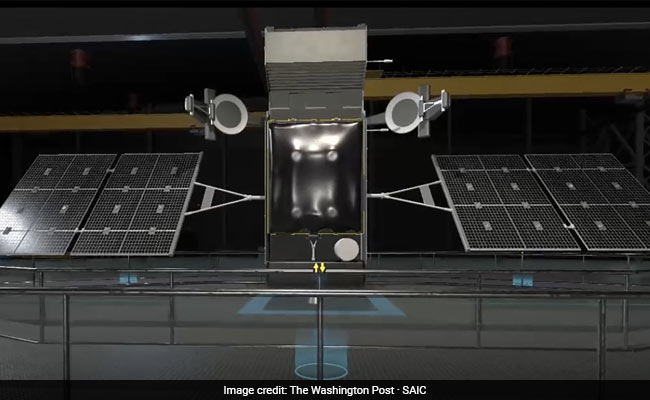 The U.S. Space Force is using virtual reality headsets to launch satellite mission operators into places they've never been before.

The military branch, started under former president Donald Trump, is working with government contractor SAIC on a gamified training platform that allows employees to interact with full-scale digital replicas of national security satellites. The platform lets the armed forces practice responding to missile warning scenarios and collaborate in cyberspace.

They're not exactly rehearsing how to destroy alien spaceships. But if satellite solar panels need to be fixed, they can practice doing that - without having to travel to space to do it. If a spacecraft needs to be repositioned, they can execute that too. If troops need more information about a mission, it's as simple as pressing a button. No space suits or textbooks necessary.

The branch's main purpose is to improve national-security capabilities in space, according to the Pentagon. More directly, Space Force's job is to maintain, protect and expand the U.S. fleet of advanced military satellites.

The contract with SAIC was established to create a virtual replica of space stations, mission control rooms and satellites, which can be difficult or costly to get to. That way, the space agency can streamline operations and train teams on what to expect before being launched on a mission.

"Sometimes you go to these demos, and it's just some nondescript room, but it doesn't really look like your (real world) environment," said John Lynch, program director for SAIC, who manages the firm's contract with the Space and Missile Systems Center. "We wanted the experience (to feel) like you were actually there."

Typically, experiential training requires custom simulators that could cost millions of dollars to build. The contractor worked to bring costs down by developing a cloud-based platform that can be updated over-the-air and deployed on a mass scale.

The outcome is a video game-like experience accessible on Facebook's Oculus Quest headsets.

Essentially, they're in cyberspace with colleagues where they role playas if they were at international space stations and mission control centers.

The simulation experience is pretty straightforward. Space Force troops, which have officially been dubbed "Guardians," can choose from predesigned avatars before being launched into a virtual lobby where they wait for up to seven others to join in.

Instructors or field experts can digitally lead them into the satellite simulation to teleport around the satellite, chat with other troops, pull levers and press buttons as if they were on an actual worksite. They can open the satellite's front to examine its internal mechanics and press information icons for greater context.

Up close, the digitized satellite is detailed, with 3-D solar panels, antennas and visible nuts and bolts. It's modeled after a missile warning spacecraft that's part of the agency's Space Based Infrared System constellation.

Toggles on gaming controllers allow users to pick items up, draw images in midair and use laser pointers to spotlight specific areas on the satellite or elsewhere in the room.

Oculus Quest headsets retail for $299 and are cheaper to buy and send out than immersive alternatives. VR competitors such as the HTC Vive retail for $499 and require high-powered gaming laptops to run. The Oculus Quest is a stand-alone unit, with no cords attached, making it more appealing for exploration scenarios, according to Scott Hungerford, game development specialty manager at SAIC.

The company says it didn't have a deal with Facebook when it bought the headsets last spring.

The satellite training platform is one of the latest projects from SAIC, a $7.1 billion technology support company based in Reston, Va. The Army awarded the firm an $830 million contract in February to provide engineering, software and simulation for the Department of Defense.

The Space Force is the sixth branch of the U.S. military and the first new military service since the Air Force's creation in 1947. The force relies on SAIC to modernize satellite ground systems at Kirtland Air Force Base in New Mexico and Schriever Air Force Base in Colorado.

Moving forward, SAIC plans to bolster the platform with tools such as magnifying glasses so that officers can take a closer look at satellite parts. The contractor is also looking toward augmented reality experiences, where users can train using real-world screens wrapped in virtual environments.