The blast took place as a result of a supermassive black hole at the Centre of a galaxy hundreds of millions of light-years away. 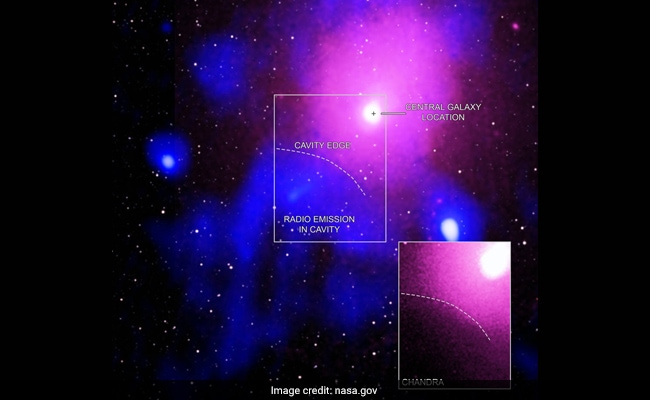 The biggest explosion in the universe after the Big Bang has been discovered by scientists studying a distant galaxy cluster.

The blast took place as a result of a supermassive black hole at the Centre of a galaxy hundreds of millions of light-years away.

Professor Melanie Johnston-Hollitt, from the Curtin University node of the International Centre for Radio Astronomy Research, said that the event was extraordinarily energetic.

"We have seen outbursts in the Centres of galaxies before but this one is really, really massive," said Johnston-Hollitt.

"And we do not know why it is so big. But it happened very slowly -- like an explosion in slow motion that took place over hundreds of millions of years," added Johnston-Hollitt.

The explosion occurred in the Ophiuchus galaxy cluster, about 390 million light-years from Earth.

It was so powerful it punched a cavity in the cluster plasma -- the super-hot gas surrounding the black hole.

Lead author of the study, Dr Simona Giacintucci, from the Naval Research Laboratory in the United States, said that the blast was similar to the 1980 eruption of Mount St. Helens, which ripped the top off the mountain.

"The difference is that you could fit 15 Milky Way galaxies in a row into the crater this eruption punched into the cluster's hot gas," said Giacintucci.

Professor Johnston-Hollitt said that the cavity in the cluster plasma had been seen previously with X-ray telescopes.

But scientists initially dismissed the idea that it could have been caused by an energetic outburst, because it would have been too big.

"People were skeptical because of the size of the outburst. But it really is that. The Universe is a weird place," she said.

The researchers only realised what they had discovered when they looked at the Ophiuchus galaxy cluster with radio telescopes.

"The radio data fit inside the X-rays like a hand in a glove," said co-author Dr Maxim Markevitch, from NASA's Goddard Space Flight Center.

"This is the clincher that tells us an eruption of unprecedented size occurred here," Markevitch said.

Professor Johnston-Hollitt, who is the director of the MWA and an expert in galaxy clusters, likened the finding to discovering the first dinosaur bones.

"It is a bit like archaeology. We have been given the tools to dig deeper with low-frequency radio telescopes so we should be able to find more outbursts like this now," she said.

The finding underscores the importance of studying the Universe at different wavelengths, Professor Johnston-Hollitt said.

"Going back and doing a multi-wavelength study has really made the difference here," she said.

Professor Johnston-Hollitt said that the finding is likely to be the first of many.

"We made this discovery with Phase 1 of the MWA, when the telescope had 2048 antennas pointed towards the sky," she said.

"We are soon going to be gathering observations with 4096 antennas, which should be ten times more sensitive. I think that is pretty exciting," she added.

This Large Exoplanet Could Have Right Conditions For Life