3 Giant Black Holes On The Path To Collision, Captured In Rare Discovery

While three supermassive black holes colliding may sound easy to detect, the light-hogging black holes are shrouded in gas and dust that hide it from our telescopes. 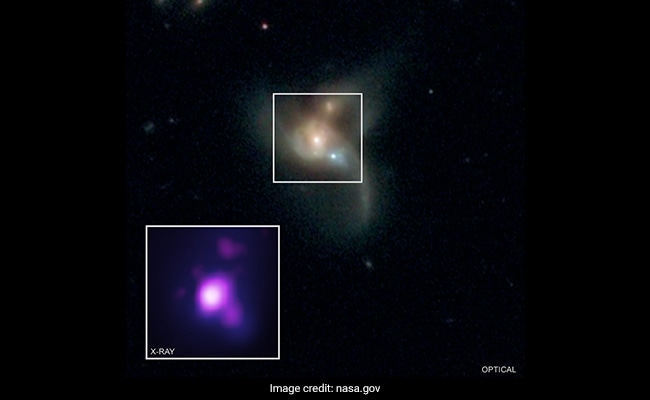 The system was captured using multiple telescopes on the ground, as well as in space

Three galaxies are on the course to collision, along with the giant black holes at the centre of each of them, a new study found. This has been spotted by astronomers at NASA for the first time. The phenomenon is taking place a billion light years away from Earth in a system is known as SDSS J084905.51+111447.2 (SDSS J0849+1114 for short).

"We were only looking for pairs of black holes at the time, and yet, through our selection technique, we stumbled upon this amazing system," said Ryan Pfeifle, the first author of the study, in a statement. "This is the strongest evidence yet found for such a triple system of actively feeding supermassive black holes."

The system was captured using multiple telescopes on the ground, as well as in space. It was first imaged by the Sloan Digital Sky Survey or the SDSS telescope in New Mexico, US. Then, citizen scientists participating in Galaxy Zoo, a crowdsourced astronomy project, helped in tagging it as a system of colliding galaxies.

The researchers then looked at the data collected by NASA's Wide-field Infrared Survey Explorer (WISE) mission. The system was found to glowing intensely in infrared lights. They then turned to the Chandra X-ray Observatory and the Large Binocular Telescope (LBT) in Arizona.

The Chandra data revealed the bright spots at the centre of each galaxy where scientists expect to find the massive black hole. Along with NASA's Nuclear Spectroscopic Telescope Array, Chandra also found evidence of large amounts of gas and dust around one of the black holes, as was expected in a merger of such scale.

Optical light data from SDSS and LBT further showed signs of material being gobbled by the three supermassive black holes.

"Through the use of these major observatories, we have identified a new way of identifying triple supermassive black holes. Each telescope gives us a different clue about what's going on in these systems," said Ryan Pfeifle. "We hope to extend our work to find more triples using the same technique".

While three supermassive black holes colliding may sound easy to detect, the light-hogging black holes are shrouded in gas and dust that hide it from our telescopes.