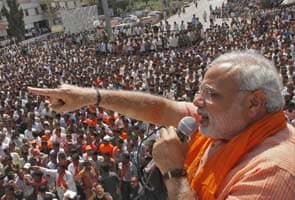 For many Indians, Narendra Modi is the man of the moment, a possible prime minister. Others see the chief minister of Gujarat as a Hindu zealot who did not stop the massacre of Muslims in religious riots a decade ago.

As the 62-year-old moved from village to village on the campaign trail this month, he was greeted by ecstatic crowds, surging forward to catch a glimpse or to touch him as though he were a living god.

Not only expected to win a fourth consecutive term as chief minister in December polls, Modi is also seen as a serious contender to take on Prime Minister Manmohan Singh in national elections due in 2014 if he wins convincingly in Gujarat.

"Look at how many people are here," Modi said in an interview in his campaign bus, pointing and waving at a crowd of thousands assembled in Alina village. "They're even standing on the rooftops in this heat," he said, tapping a Reuters photographer's shoulder, indicating to him to take more snaps.

In many parts of India and overseas, however, Modi is remembered for being in office during the Gujarat riots in 2002 that killed more than 1,000 people by official count, mainly Muslims. NGOs and other groups put the death toll around 2,000.

His administration was seen as culpable, and for years Modi was a political pariah, vilified at home and shunned by the West.

His slow rehabilitation has been thanks in large part to projecting the administrative efficiency that the rest of India seems to lack. Gujarat is an investor favourite, attracting global firms such as Ford Motor Co, while Modi has benefited from a concerted image makeover.

In a sign of his growing clout, the British ambassador to India went to Gujarat to visit Modi last week. It was a policy turnaround on London's part, and a major boost in Modi's quest to be accepted as a mainstream political leader.

The question now is whether Modi can build on this momentum and use Gujarat's high growth to overcome the deep distrust and fear of many Indians, especially Muslims.

"Narendra Modi may be the darling of India's entrepreneurs and he's perhaps the only person who a whole bunch of well-heeled industrialists have openly said that they would like to see as the prime minister of India," said political analyst Paranjoy Guha Thakurta.

"Despite his best attempts to refurbish his image, I don't think he's ever going to live down that particular phase of his administration where Muslims were systematically targeted and massacred in Gujarat."

Critics accuse Modi of not doing enough to stem the violence in 2002, or even quietly encouraging it - allegations he has strenuously denied and have never been proved in inquiries.

A former member of Modi's state cabinet, Maya Kodnani, was sentenced to 28 years in jail for the violence. Kodnani, a gynaecologist, handed out swords to Hindu rioters and exhorted them to attack Muslims, according to witnesses.

Interviews with officials in Modi's government and local business leaders paint a picture of a man with a phenomenal memory, great attention to detail, unflagging energy and a flair for publicity.

But they also show a man with a vindictive streak, capable of holding grudges for years and intolerant of dissent.

Critics see Modi as a divisive figure who may struggle to win the backing of his Bharatiya Janata Party (BJP), the country's main opposition, in a general election.

"If you are on the dislike list, then you're finished," said one government source, who spoke on condition of anonymity.

A company executive, who has met the chief minister several times, recalls leaving one of Modi's functions early - only to be reminded about this when they met again, months later.
"He remembers every little detail," the executive said. "Nothing escapes him."

Narendra Modi was born to lower middle class parents in northern Gujarat. As a youth, he worked in his family's tea stall, according to a sympathetic biography.

After some years wandering through the Himalayas on a journey of spiritual discovery, Modi rose through the ranks of the Rashtriya Swayamsevak Sangh, a Hindu nationalist organisation that is the ideological parent of the BJP.

A stocky, bespectacled man with a trimmed white beard, Modi is known for his ascetic lifestyle and enthusiasm for yoga. Local media say he married at a young age, but he has never publicly acknowledged this. He has no children.

Modi first became chief minister in October, 2001, just months before the religious riots.
Washington denied him a US travel visa in 2005 for religious intolerance, although this year the US consul-general in Mumbai joined Modi at a public event, seen as a sign of a possible rapprochement.

Modi's star has steadily risen in the past decade, and he could represent the BJP's best chance to defeat the ruling Congress party.

"Gujarat is in such a position where I don't have to make any special effort to build investors' confidence," he told Reuters. "Gujarat has already won a huge amount of confidence, not only nationally, but globally too."

While national economic growth has slowed sharply, Modi's Gujarat has achieved the double-digit expansion to which India aspires as a rising global power. In contrast to huge power shortages that plague most of India, the state boasts uninterrupted electricity supply.

Companies have lauded Modi for the ease of doing business in Gujarat, the speed with which land can be acquired for factories and a comparative absence of bureaucratic delays that can throttle projects elsewhere.

"If you meet him at six o'clock in the morning and again at eleven o'clock at night: same Modi," Desai told Reuters. "He'll not feel tired."

Sceptics have questioned how much Gujarat owes its prosperity to the current administration, arguing that the state has long been known as one of India's growth drivers.
But even Modi's critics acknowledge his ability to pitch Gujarat as a go-to destination for new businesses, holding investor summits every two years that attract some of the country's biggest business tycoons.

Modi has also made concerted efforts to project himself as a moderate. He is trying to promote religious harmony and has toned down his speeches, shifting their focus from Hindu revivalist rhetoric to trumpeting investment.

Modi's critics have dismissed his efforts.

"If a man like him can even be chief minister for this long, there's something seriously wrong with our society," said M Hasan Jowher, head of a Gujarat-based NGO.

Promoted
Listen to the latest songs, only on JioSaavn.com
"Somebody who ought to have been languishing in jail, behind bars, or tried for culpable homicide if not genocide, he is presiding over a large state and is being viewed by a large mass of people as a messiah."