Manuel Antonio Noriega, Former CIA Agent Who Got On Wrong Side Of The United States

Manuel Antonio Noriega, 83, died in a hospital late Monday as he was recovering from surgery to remove a brain tumor. He was dictator of Panama 1983-1989. 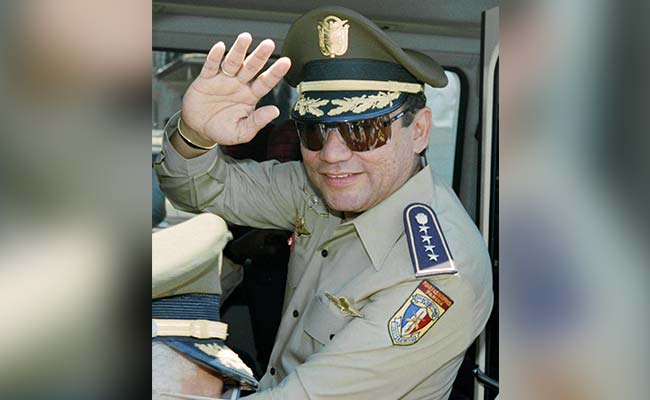 Panama city: The late Manuel Antonio Noriega's public persona was extinguished nearly three decades ago, when the United States toppled him in an invasion that spoke volumes about Cold War tensions at the time.

Noriega, 83, died in a hospital late Monday as he was recovering from surgery to remove a brain tumor. He was dictator of Panama 1983-1989.

Noriega's ignominious ouster by US troops in December 1989 was a dramatic fall from power for a man who had risen through the ranks of Panama's military while working for the CIA, to become de facto ruler of a country that hosts the strategic Panama Canal.

The ex-strongman was captured and imprisoned in the United States, France and later Panama under a variety of charges, ranging from drug trafficking, money laundering and forced disappearances.

Short in stature and with a pockmarked face, Noriega was considered an unscrupulous and opportunistic officer who juggled relationships with Colombian drug lord Pablo Escobar, Cuba's Fidel Castro and several foreign intelligence services.

"The most surprising thing in the life of Manuel Antonio Noriega was what he did to the (military) institution, making it an instrument, a macabre combination of crime and drug trafficking," said a former National Guard general, Ruben Dario Paredes, who used to be Noriega's commanding officer and who is now a critic.

Born to a poor family in Panama City on February 11, 1934, Noriega started his military career at a young age.

Reportedly recruited onto the CIA payroll in 1967, his rise through the ranks began when he took part in a 1968 coup against then-president Arnulfo Arias.

A year later one of the coup's leaders, General Omar Torrijos, promoted him to head the feared G-2 military intelligence unit.

In 1983, two years after Torrijos' death in a mysterious plane crash, Noriega took charge of the now-defunct National Guard, giving him de facto power over the country.

Noriega lived a life of luxury with his wife Felicidad and their three daughters Sandra, Lorena and Thays. They lived in a sumptuous estate that included a mini-zoo, a private casino and a ballroom.

The mansion was the scene of extravagant parties, and in the main bedroom there was a giant safe that rumors said contained millions of dollars' worth of various currencies -- a fortune that supposedly vanished when the US troops invaded.

"Pineapple Face" -- as Noriega was known due to his facial acne scars -- played various sides off each other to stay in power while civil wars fueled by US-Soviet Cold War rivalry raged across much of the rest of Central America.

In time Noriega's brutal tactics to stay in power set the foundation for his eventual ouster -- especially his defiance of then US president Ronald Reagan, who wanted him removed from office.

In 1986, a US intelligence leak to The New York Times revealed that Noriega was involved in the torture and decapitation a year earlier of a guerrilla and opposition critic, Hugo Spadafora.

Roberto Diaz Herrera, a colonel who was second-in-charge in the regime, then accused Noriega of electoral fraud, corruption and being behind the plane crash that killed the popular Torrijos.

Those and other accusations triggered public protests and unrest that sharpened Washington's determination to remove him from office.

Thousands of Panamanian civilians died in the US attack. Noriega fled to the Vatican embassy, where he bunkered down for days as US soldiers outside blasted rock music in an attempt to smoke him out.

Noriega surrendered to the US forces on January 3, 1990 and was flown to the United States, where he was sentenced to 40 years in prison on drug trafficking charges. He ended up serving 21 years of that term, which was reduced for "good behavior."

In 2010 however Noriega was sent to France, where he was sentenced to seven years for laundering $3 million in cash from the Medellin drug cartel through French banks.

One year later France extradited him back to Panama, where the now broken down ex-dictator arrived in a wheelchair. Noriega had been sentenced in absentia to three 20-year prison terms for the forced disappearances of opposition figures, including Spadafora.

Panama's authorities rejected multiple requests for Noriega to serve out his sentence under house arrest based on ill health, said to include strokes, respiratory problems, prostate cancer and depression.

The former dictator likely went to his grave without divulging many secrets built up over a lifetime of shady dealings.

"In the name of God, I swear I had nothing to do with the deaths of any of these people," Noriega said shortly before his death, referring to the many victims attributed to him.

Promoted
Listen to the latest songs, only on JioSaavn.com
"There was always a permanent conspiracy against me. But I am here, standing straight, with no cowardice."