Mallikarjun Kharge, 80, Likely To Be 2nd Congress President From Karnataka

If elected, Mallikarjun Kharge will be the second Congress president from Karnataka after S Nijalingappa, and also a Dalit leader to hold the post after Jagjivan Ram. 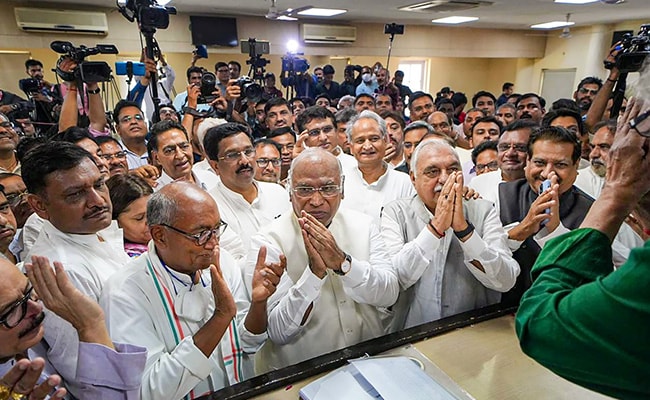 Popularly known as "Solillada Saradara" (a leader without defeat) in his home-State of Karnataka Mapanna Mallikarjun Kharge, who on Friday filed nomination for the Congress' presidential polls, is a hardcore loyalist of the Gandhi family.

If elected, he will be the second AICC president from Karnataka after S Nijalingappa, and also a Dalit leader to hold the post after Jagjivan Ram.

A leader with more than 50 years of experience in politics, 80-year-old Kharge, who was elected MLA for nine times in a row, has seen a steady rise in his career graph from humble beginnings as a union leader in his home-district of Gulbarga, now Kalaburagi.

In 1969, he joined the Indian National Congress and went on to become president of the Gulbarga City Congress Committee.

That Kharge was unconquerable at the hustings was mirrored until 2014 Lok Sabha polls in which he bucked the Narendra Modi wave that swept Karnataka, particularly Hyderabad-Karnataka region, and had won from Gulbarga with a margin of over 74,000 votes.

He has won from Gurmitkal Assembly constituency nine times in a row before he plunged into the Lok Sabha poll arena in 2009 and has been a two-time MP from Gulbarga parliamentary segment.

However, in the 2019 Lok Sabha polls the veteran leader was defeated by BJP's Umesh Jadhav in Gulbarga by a margin of 95,452 votes. That was the first electoral loss in Kharge's political life spanning several decades.

A hardcore Congressman loyal to the Gandhi family, Kharge has played multiple roles in different ministries that have enriched his experience as an administrator.

He has also served as the Leader of the Opposition in Karnataka Assembly and at the central-level as also in the party where he had served as KPCC chief during the 2008 Assembly polls.

Kharge, who was leader of the Congress party in Lok Sabha from 2014 to 2019, could not become the Leader of Opposition as the grand old party could not get the post as its numbers were less than the mandated 10 per cent of the total number of seats in the Lower House.

He has served as Union Cabinet Minister- Labour and Employment, also Railways and Social Justice and Empowerment in the Manmohan Singh-led UPA government.

He had also held various portfolios in successive Congress governments that governed the State and was also president of Karnataka Congress and Leader of the Opposition in the State Assembly.

In June 2020, he was elected unopposed to the Rajya Sabha from Karnataka, and is currently the 17th Leader of the Opposition in Upper House of Parliament succeeding Ghulam Nabi Azad in February last year.

He was several times seen as a top contender for the Chief Minister post in Karnataka, but could never occupy the post.

"Why do you keep saying Dalit again and again? Don't say that. I'm a Congressman," Kharge has said several times in the past, whenever the Dalit CM topic cropped up with him as the contender.

Sober by temperament and nature, Kharge has never landed in any major political trouble spot or controversy.

Born in a poor family at Varavatti in Bidar district, he did his schooling and BA as well as Law in Gulbarga. He was into legal practice for some time before plunging into politics.

He is a follower of Buddhism and is the founder-chairman of Siddharth Vihar Trust that has built the Buddha Vihar complex in Gulbarga.

Married Radhabai on 13 May 1968 and they have two daughters and three sons. One son Priyank Kharge is an MLA and a former Minister.