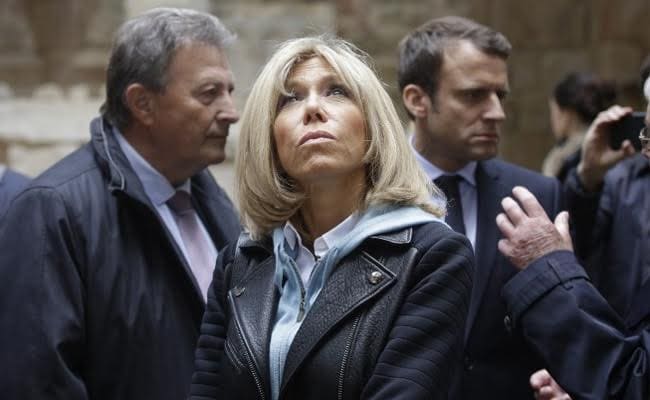 Paris: After winning the top spot in the first round of France's presidential election, centrist Emmanuel Macron brought his wife Brigitte on stage before cheering supporters and said, "Without her, I wouldn't be me."

She has been in her 39-year-old husband's life since he was 15 -- first as a teacher, then lover and now as a partner in his pursuit to become modern France's youngest president.

Elegant and slim, the 64-year-old blonde with blue eyes is Macron's closest collaborator, whom he has pledged to give an official role at the presidential palace if he emerges victorious in the May 7 runoff vote.

"Every night we debrief together and we repeat what we have heard about each other," she told Paris Match magazine in 2016. "I have to pay attention to everything, do the maximum to protect him."

Brigitte Macron has been on the cover of nearly a dozen magazines and at her husband's side for full-to-capacity rallies, while the world has been fascinated by the couple's atypical romance.

But before all that she was another man's wife and mother of three who taught French as well as Latin, English and drama and was on course for a comfortable, if somewhat conventional life.

Brigitte Trogneux was born on April 13, 1953, in Amiens in northern France, which is also Emmanuel Macron's hometown, into a prosperous family that runs a well-known pastry and chocolate business.

Then in the early 1990s she was blown away by a young man acting in a production of Milan Kundera's "Jacques and his Master". It was Emmanuel.

She quickly agreed when he asked her to help him work on a script and thus they began to build a bond.

The teacher, then 39, was "totally captivated" by 15-year-old Emmanuel's intelligence. The feeling was mutual and two years later he made a bold prediction.

"At the age of 17, Emmanuel said to me: 'Whatever you do, I will marry you!'," Brigitte Macron told Paris Match magazine last April.

'I know my place'

Emmanuel Macron went off to finish high school at an elite establishment in Paris, but he did not quit pursuing her and little by little she was won over.

Brigitte left her husband Andre Louis Auziere, a banker, in 2006 and married Macron a year later, moving to Paris where he continued his studies and she worked as a teacher.

"When I make up my mind about something, I do it," she said in a documentary about Emmanuel.

Described as warm and down-to-earth by those who know her, her charm and positive disposition have left a mark on her friends.

One of them, Gregoire Campion, met her on a beach in the northern resort town of Le Touquet over 40 years ago. Their cabanas were next to each other and he remembers the young Brigitte "wasn't a party animal" but was "very educated".

Le Touquet has remained a part of her life and the now grandmother of seven has spent many weekends there with her family.

It is a place to gather with her son and two daughters from her first marriage -- who have grown up to be an engineer, a cardiologist and a lawyer.

Yet the life with her politician husband and the massive commitment of the campaign remains a major focus.

"I am lucky to share this with Emmanuel, even if in regards to politics I haven't had much choice," she has said, also voicing the desire to help disadvantaged youths if she becomes France's first lady.

Brigitte's willingness to be a public figure stands in stark contrast to the partner of her husband's far-right rival Marine Le Pen.

The private life of 47-year-old Louis Aliot, who has been involved in Le Pen's National Front (FN) party since the late 1980s, has not been part of her campaign.

Promoted
Listen to the latest songs, only on JioSaavn.com
"The French people are going to elect a president. They are not going to elect a couple or half of a couple," said Aliot. "I know my place."