The Home Minister in the previous government,, on whom Prime Minister Narendra Modi banked on heavily in the last five years whenever there was a crisis, has been appointed as a Cabinet minister again. 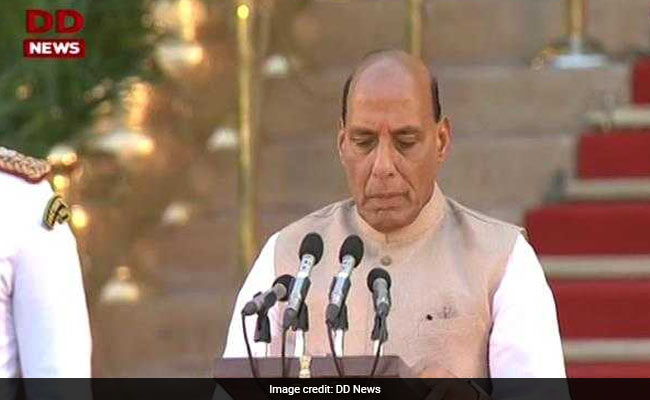 Many see a reflection of Atal Bihari Vajpayee's mannerisms in Rajnath Singh.

One of the top leaders of the Bharatiya Janata Party (BJP), Rajnath Singh is a man of all seasons who maintains cordial relations with leaders across the political spectrum and enjoys wide acceptability.

The Home Minister in the previous government, on whom Prime Minister Narendra Modi banked on heavily in the last five years whenever there was a crisis -- be it farmers' agitation, violence in Jammu and Kashmir or Jat quota stir -- has been appointed as a Cabinet minister again.

Many see a reflection of Atal Bihari Vajpayee's mannerisms in him and feel he has been carrying forward the party veteran's legacy as "Ajatshatru" -- a man with no enemies.

His good rapport with opposition leaders like Ghulam Nabi Azad, Mamata Banerjee, Mulayam Singh Yadav, and Omar Abdullah had made him government's pointsman for any discussion with the opposition.

Even during the bitter political campaign, 67-year-old Singh, who was contesting from Lucknow Lok Sabha seat, was never drawn into any ugly war of words with his opponents.

The image of the minister carrying on his shoulder the coffin of soldiers killed in February 14 Pulwama terror attack also resonated with the public.

A former professor of physics, it was Mr Singh, as BJP President in 2013, who was instrumental in declaring Narendra Modi as the prime ministerial candidate, despite strong opposition from veterans like LK Advani.

Rajnath Singh was the third leader of the BJP, after PM Modi and BJP president Amit Shah, who had extensively campaigned for the BJP in the 2019 Lok Sabha elections.

He was the chief minister of Uttar Pradesh between 2000-2002, had also held the portfolios of Surface Transport and Agriculture in Atal Bihari Vajpayee government.

Mr Singh was appointed district president of the Jana Sangh in 1975 at the age of 24 and was elected as legislator from Mirzapur in 1977.

Mr Singh was elected a member of the UP Legislative Council in 1988 and became Education Minister of the state in 1991. During his tenure as Education Minister in UP, he established some landmarks by introducing the Anti-Copying Act and Vedic Mathematics in the syllabus and correction of various portions of history textbooks.

He became a member of the Rajya Sabha in 1994 and also the Chief Whip of the BJP in the upper house.

In 1997, Mr Singh became state president of Uttar Pradesh BJP. During this period, apart from expanding and strengthening the organisation, he played a key role in saving the BJP-led government twice during political crisis.

Mr Singh was appointed Union Surface Transport Minister in 1999 and during this period, he got the opportunity to initiate the National Highway Development Programme, a dream project of then Prime Minister Vajpayee.

In October 2000, he became Chief Minister of UP and was twice elected as legislator from Haidargarh constituency in Barabanki. In 2002, he became National General Secretary of the BJP.

On May 24, 2003, he became Union Minister of Agriculture and subsequently for Food Processing. During this period he initiated a few epoch making projects like Kisan Call Centre and Farm Income Insurance Scheme.