According to the MeT Department, the city received 145 mm rainfall since the previous day, the highest for this date in a decade. 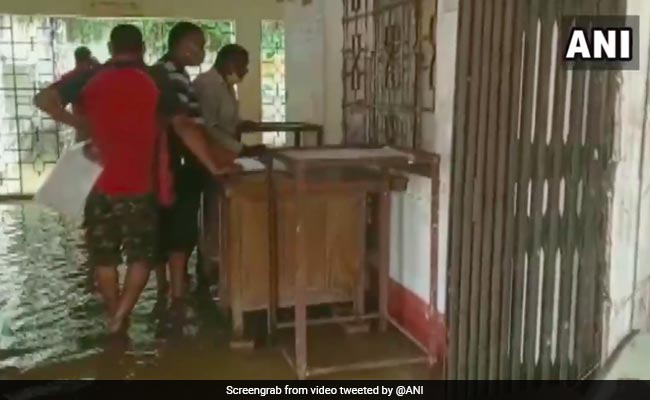 Several parts of Patna were flooded with heavy rain.

Several parts of Patna, including Bihar assembly premises and the residence of Deputy Chief Minister Renu Devi, were flooded on Saturday following heavy rain that began to pound the city the previous evening.

According to the MeT Department, the city received 145 mm rainfall since the previous day, the highest for this date in a decade.

Residents woke up in the early hours to deafening sounds of thunderbolts though, so far, there have been no reports of deaths caused by lightning in the city or its outskirts.

By around 9 AM, the showers abated but people had to wade through knee-deep water, with trousers rolled up and footwear in the hands, to venture out. Heavy water-logging was seen in most parts of the city, including posh localities like Shri Krishna Puri and Patel Nagar.

Besides, the colonial-era Vidhan Sabha building stood like a desolate, marooned fortress with photo and video journalists dropping in at frequent intervals to capture the images.

Similar was the scene at the official bungalow of Deputy Chief Minister Renu Devi, who resides a few hundred meters away.

However, Patna Municipal Corporation officials claimed that by noon, water was pumped out from most of the ''main roads'' though water-logging at by-lanes and streets in low-lying areas remained a problem.

Local news channels beamed footages of residents of such localities expressing anxiety that fresh downpour might lead to "a repeat of October 2019", when boats had to be plied on submerged roads and IAF helicopters had been roped in for air-dropping essential items.