Why The Farmer In Madhya Pradesh, Maharashtra Is So Angry

Peasant unrest in contemporary India has always been sporadic and largely unfocused. While agriculturists have been mobilized in large numbers in support of agitations for caste-based reservations or local issues like the creation of a new district, stoppage of long-distance trains at particular points and so on, rarely have they championed specific issues of farmers.

Significantly, political parties have been quite unsuccessful in galvanizing peasants into action on political demands. Although the original movement for a separate Telangana in 1948 developed into an armed peasant insurrection led by legendary Communists leaders like BT Ranadive and P Sundaraya, it soon fizzled out after then Prime Minister Jawaharlal Nehru called in the army to quell the unrest. The undivided CPI was in any case divided on the issue of carrying out an armed struggle. Similarly, the Tebhaga movement in Bengal around the same time (for agricultural produce to be divided in three equal parts to ensure the tiller's right to the crop) was also led by the Communist Party and petered out by the early 50s although it was successful in attaining its aims in a large measure.

The current disturbances in some districts of Madhya Pradesh and the rising momentum of agitational politics in other states like Maharashtra are, however, of a different nature. They are rare expressions of what Marxists would call a class agitation by the peasantry cutting across socio-economic differentiation. Ironically, however, Marx had little faith in the political or agitational ability of peasants whom he contemptuously referred to as "a sack of potatoes", meaning they had no backbone. He also believed that the peasantry, even if it was a class by itself, could never be a class for itself. (These references are from Karl Marx's celebrated essay: The Eighteenth Brumaire of Louis Napoleon, written in 1851). Although considerably outdated, there is still some truth in Marx's assessment. Farmers scattered over large distances and lacking a structured leadership are not in a position to organize themselves sufficiently to conduct a sustained agitation. Their unrest therefore is usually sporadic and short-lived. 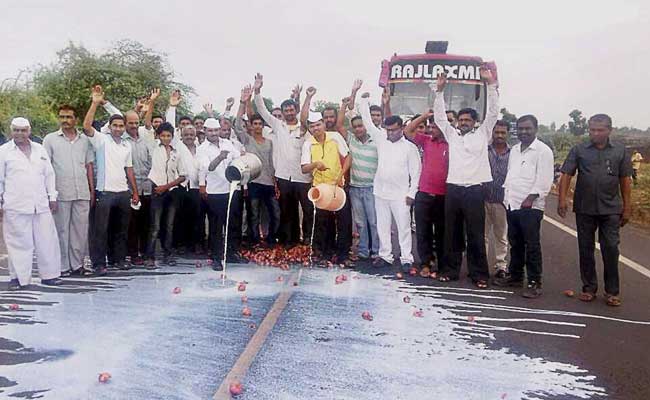 Farmers spill milk on the road on the second day of their state-wide protest in Nasik, Maharashtra

But the violent protests in parts of Madhya Pradesh and the endemic agitation in Maharashtra point to a deeper malaise affecting Indian agriculture and agriculturists. The fact is that farming has progressively become an unprofitable occupation on account of rising input costs on the one hand, and the inability of governments, on the other, to pay a lucrative support price for agricultural produce. At the root is the system of semi-private, semi-public economic management of agriculture, As a result, the government intervenes in the agrarian market to ensure farmers don't resort to distress sale of their produce. The government also directs public sector banks to advance loans to farmers at officially-dictated interest rates that are well below the standard rates charged by banks. From time to time, the government intervenes further to waive or substantially write-off loans taken by farmers. This is a populist measure that is resorted to by most political parties at election time.

In other words, agriculture in India is neither fully market driven nor is it totally under the government's control. Every year, the authorities announce a set of MSPs (Minimum Support Price) for diverse agricultural commodities primarily to provide a bargaining chip to farmers while negotiating sale of their produce to private purchasers once official agencies have concluded their purchase. The government through its subsidiary the Food Corporation of India (FCI) is also a major buyer of farm produce, but obviously cannot buy out the entire crop of farmers. In scarcity years, farmers succeed in selling their produce at prices higher than the MSP to private buyers. But when a glut occurs, farmers look to the FCI to sell their output at the official price even if it is less than lucrative.

These paradoxes have resulted in the Indian farmers' crippling dependence on the monsoon which varies from year to year. Also India's supply chain is quite underdeveloped: there are few long-term storage facilities, inadequate number of mandis or market places to which agricultural produce needs to be brought, and the virtual absence of a cold chain to store perishable commodities such as vegetables. Meanwhile, prices of fertilizers, seeds and other inputs, including the cost of water supply, keep increasing. Further, labour is nowadays in short supply particularly as the government's otherwise well-intentioned MNREGA (Mahatma Gandhi Rural Employment Guarantee Act) tends to absorb labour in their own villages, reducing mobility when they are most in demand such as at harvest time. 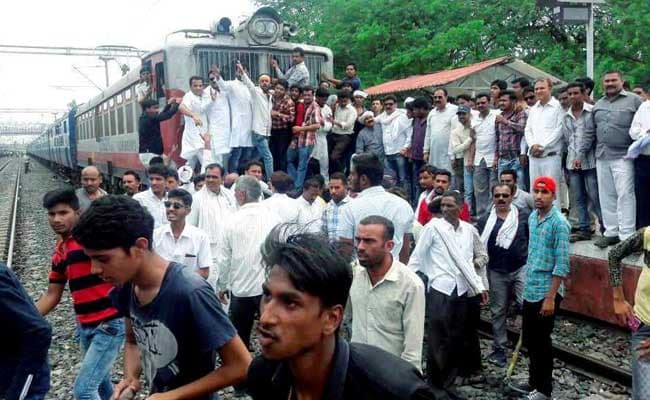 Farmers stopping a train during their nation-wide agitation in Dewas, Madhya Pradesh

For years, different governments have promised to implement the formula for calculating the MSP proposed by eminent agricultural scientist MS Swaminathan. His formula envisages a MSP that pays farmers 50 per cent more than the input cost, which would leave a fair degree of profit with the farmer. But implementation of this formula will certainly push up the retail selling price of food grain and also increase the burden on the exchequer quite considerably.

The issue needs urgent resolution because desperate farmers are nowadays burdened with heavy loans often borrowed from private banks at high interest. Agents of these banks target vulnerable farmers, offering loans on attractive terms, but the consequences are devastating if farmers are unable to repay in time. It is well known that the maximum number of farmers' suicides have happened on this count and the number of such tragedies is rising every year. It is the accumulation of all these grievances that has resulted in the large-scale revolt of farmers in various states.

The loan waiver given to UP farmers by the Yogi Adityanath Government recently is being cited as the trigger factor for the agitation snowballing in Madhya Pradesh and Maharashtra, all states ruled by the BJP.  But in this age of instant information flow, such demands would have arisen across the board no matter where such a concession was given. Governments therefore need to take such a call only in consultation with the centre in a holistic manner. Most importantly, some brain-storming is necessary to take a systematic view on farmers' issues. It is apparent that finally, farmers have started behaving like a class for themselves. Growing commercialization of agriculture is responsible for this development.

Since more than 60 percent of India's population lives off agriculture which, ironically, contributes only 13 percent to India's GDP, the central government has to work towards a long-term policy that awards a profitable price for farm produce while not upsetting the balance to such an extent that the terms of trade tilt heavily against manufacturing industry and services. This is a tall order but one that has to be accomplished.

(Dr. Chandan Mitra is a journalist, currently Editor of The Pioneer Group of Publications. He is also former BJP MP, Rajya Sabha.)

Disclaimer: The opinions expressed within this article are the personal opinions of the author. The facts and opinions appearing in the article do not reflect the views of NDTV and NDTV does not assume any responsibility or liability for the same.
Comments
Farmers in IndiaFarmers protestsminimum support price (MSP)