When We Couldn't Stop a Whale From Dying Near Mumbai

How big you ask? Well, on an average between 80 to a 100 feet long, weighing in at about 180 tonnes. It is as big as a Boeing 737 airplane. It's heart is the size of a Volkswagen Beetle, it's tongue as heavy as that of an entire African elephant, and its cry louder than the roar of a jet plane.

An estimated 350,000 blue whales were killed in the 20th century. Today, they are classified as endangered. It's illegal to kill them and population numbers are estimated between 2,500 and 5,000. If the sub-species of the Pygmy blue is to be added, the numbers might be slightly higher.

And one washed up at the Alibaugh beach near Mumbai. It was alive when it washed up on Wednesday and died a day later. Without any protocol in place for stranded whales, all attempts at refloating it failed and finally it was buried in a 50-foot grave. Tissue samples have been taken for DNA analysis as there is no one in India qualified to perform a proper necropsy on it. A necropsy is important in order to understand if there was any internal sickness in the whale that caused her to beach herself. 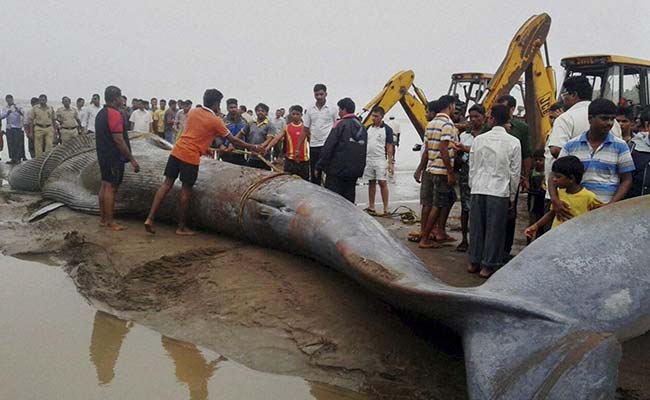 (The Blue Whale that beached at Alibaug was about 42 feet long.)

It will be easy to be critical of all these facts, but here is the truth. Firstly, while whale strandings might not be rare, they are not exactly frequent. An estimated 2,000 cetaceans beach themselves a year. Cetaceans also include dolphins. Secondly, most beachings end in death with or without human intervention. Usually, it's the toothed whales and not the filter feeders who beach. Blue whales are filter feeders and strandings are practically unheard of.  And thirdly, the whale that washed up in Alibaugh could not have been refloated without either a hovercraft or a chopper big enough to airlift it into deeper waters. The damage a whale does to itself when it beaches is also usually fatal. The reason it beaches itself is usually because of injury, sickness, disorientation or pod sympathy. 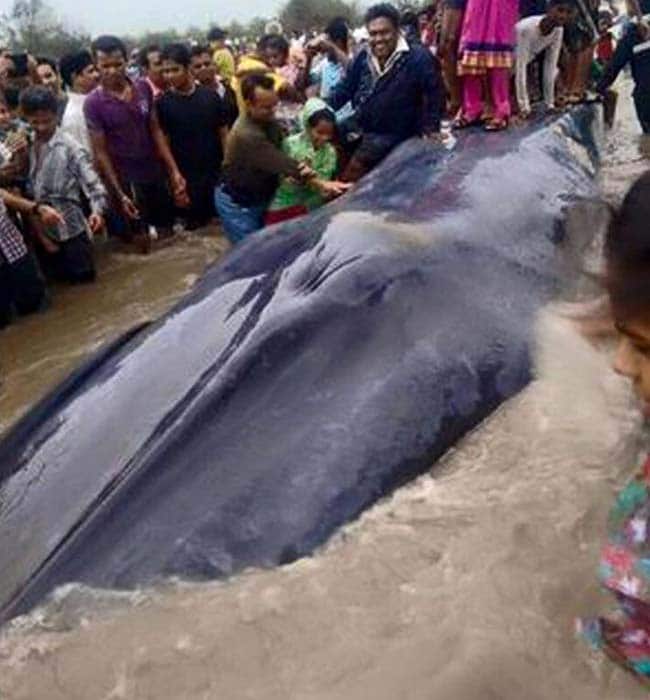 (Pictures posted on Facebook showed people standing on top of the stranded animal.)

Unlike a lot of other whales, blue whales do not move in pods larger than three members. Pod sizes matter when it comes to strandings. The larger the pods, the more probable a stranding, because if one member is in distress, the others rush in to help, invariably getting stuck themselves. Whales are some of the most sentient beings on the planet, with deep family and social bonds, and often healthy members of a pod will beach along with sick ones in a collective decision to be together. Even blue whales that move in such small groups can communicate over thousands of kilometres so are probably in touch with other family or social members without having to be together.

The size of this whale, about 42 feet, makes one wonder if it was either a newly-weaned calf or a young Pygmy blue whale. What caused it to wash up? Inexperience and a navigational error? Sonar interference? Or sickness? Hopefully, DNA analysis of the tissue samples will tell us what sub-species of blue whale it was and also what was wrong. Sometimes, sonar interference with whales' natural navigational systems throws them off course. At others, a quick change in the coastline with the forming of a new sandbar can cause shallow water where there was no memory of such. It has been speculated that whales use the magnetic field of the earth as well to navigate, and small oceanic quakes or strong lightening storms can mess with that.

Beached whales usually die from dehydration, their internal organs slowly being crushed by their own weight. Rising tides can cover their blow hole, drowning them. As graceful as whales can be in the water, as mammals they need air to breathe. Very few rescues have been successful - usually only if the animal itself cooperates and wants to be rescued.

Beaching is not a new phenomenon. It has happened through human memory and history. It's clearly something cetaceans do when in distress. It could be that their first instinct is to breathe and not drown and so they move towards shallower waters. Drowning ironically is probably a far more terrifying prospect than beaching.

India has zero protocol for strandings. But it's not unique to just us. A few years ago, about 15 pilot whales beached themselves in Cape Town and I watched the hours of immense struggle to get them back in the water. They were 1/3rd the size of the Aligbaug beached blue whale and 1/3rd its weight, and yet, they could not be refloated. A few that had been pushed into deeper waters came right back to the beach. To be with their family. Finally, authorities shot them in the head. There seemed to be no other choice. Even here, there was no proper equipment like flotation rafts, hover crafts, etc to get the animals out to sea.

The one thing that could have been done in Alibaugh, and should be done in the future, is crowd control. There are pictures on social media of locals posing for photos, standing on the whale. Think of how that could have added to the distress and suffering of the animal. We also need to charter protocol - how can we best help? Saving a blue whale may be a near- impossible feat, but dolphins are much easier to protect.

Our coastal waters in India are so extensively polluted that mass dolphin strandings have become common.

As the old wise people of the ocean, whales and dolphins are trying to tell us something each time they strand. Sometimes it's a cry for help and sometimes it's just so we can bear witness to the ravages we are responsible for in the ocean or the state of the ocean itself.

(Swati Thiyagarajan is a senior special correspondent with NDTV.)

The opinions expressed within this article are the personal opinions of the author. The facts and opinions appearing in the article do not reflect the views of NDTV and NDTV does not assume any responsibility or liability for the same.