As the Gandhi family comes to resemble the later Mughals - authority enfeebled, no longer able to win elections for the Congress, a senior leader, Virbhadra Singh, is all set to do an Amarinder Singh if his demands are not met. Virbhadra Singh is Chief Minister of Himachal Pradesh, one of the handful of states that the Congress still governs. Ahead of the Punjab election, Amarinder Singh made it clear that he was unhappy with not being named presumptive Chief Minister and would walk if he were not given total control of the campaign. His conditions were aimed at Rahul Gandhi, who eventually blinked, and Amarinder Singh proved he was right by winning Punjab. Now, Virbhadra Singh is starring in the sequel, with the plot getting a little more oomph - he has got 27 of 36 MLAs of the Congress in Himachal to write and sign an emotional appeal to the "high command" that no election can be won without "VBS".

Himachal is due to vote by the end of the year. VBS wants the urgent removal of Sushil Kumar Shinde, the former union minister who has been placed in charge of the hill state by the party, as also the Suhkvinder Singh Sukhu, who is the chief of the Congress in Himachal. As dissent peaks, Shinde is away this week celebrating the Ganpati festival in his home state of Maharashtra. Rahul Gandhi, meanwhile, is in Norway as yet another branch of the Congress teeters with dissent.

It was his mother and Congress chief Sonia Gandhi who pacified Amarinder Singh and VBS during earlier disquiet. In recent months, she has left the running of the party to Rahul Gandhi, who is scheduled to spend a couple of weeks in America soon.

Sources close to VBS, who is 83, and has served as Chief Minister six times, has three key demands and if they are not met, he will set up his own party with the backing of a large chunk of Congress MLAs. Despite serious charges of corruption during an earlier term and interrogation by the CBI, VBS, who is from the erstwhile royal family of Himachal, maintains a big mass connect.

Apart from Shinde, VBS wants the Congress' state chief Sukhvinder Singh Sukhu replaced, claiming that Sukhu, an alleged Gandhi loyalist particularly close to Priyanka Gandhi, has no mass base. VBS and Sukhu, named Congress state chief in 2013, have publicly targeted each other and are no longer on speaking terms.

In May this year, VBS along with half a dozen leaders met Gandhi Junior and raised the issue of Sukhu's replacement as he had already completed his term; he also wanted the postponement of organisational elections for party posts so that workers could focus on the state election. VBS and his supporters asked Gandhi to give him a free hand to fight the elections. Gandhi, as is his wont, took no decision. Perhaps he was buying time. Meanwhile, Sukhu publicly declared himself a "non-corrupt leader", a clear dig at the Chief Minister, and said that because the high command had not ordered that party elections be stopped, he was going ahead.

Yesterday, VBS, enraged, summoned MLAs and said he will not contest the election or lead the party in its campaign this year. The signed letter of support (scroll down) for him that is being used to pressure the Gandhis states that the Chief Minister has briefed the Gandhis on his decision and that he "refused to reveal" the details of their discussion but is clear that he will not reconsider his stand.

The letter warns that the "Singh is the tallest and only acceptable leader of the state who is capable of leading the party to victory." And "every passing minute is fatal to the party and this uncertainty is causing huge damage to the party". The MLAs who have signed it say threaten hat if Singh does not contest the election, nor will they.

Despite, this unprecedented public rebellion, the Congress could not seem to care less. VBS, who is in Delhi today in connection with his corruption case, has sought a meeting with Sonia Gandhi. Sources say that Sonia Gandhi has asked political secretary and troubleshooter Ahmed Patel to travel to Himachal if necessary to placate VBS.

Sources close to VBS dismiss as "silly plants by vested interests" reports that he wants his son Vikramaditya Singh to become the state chief. They say that Vikramaditya, who is not an MLA, is making a place for himself. Says a VBS loyalist, "So now the Congress party is objecting to dynastic politics? Can there be a bigger joke than this? We are putting up with the ineffectual Rahul Gandhi only because of the Gandhi name."

Meanwhile, Amit Shah must be pleased. As usual, the Congress makes his work a lot easier. 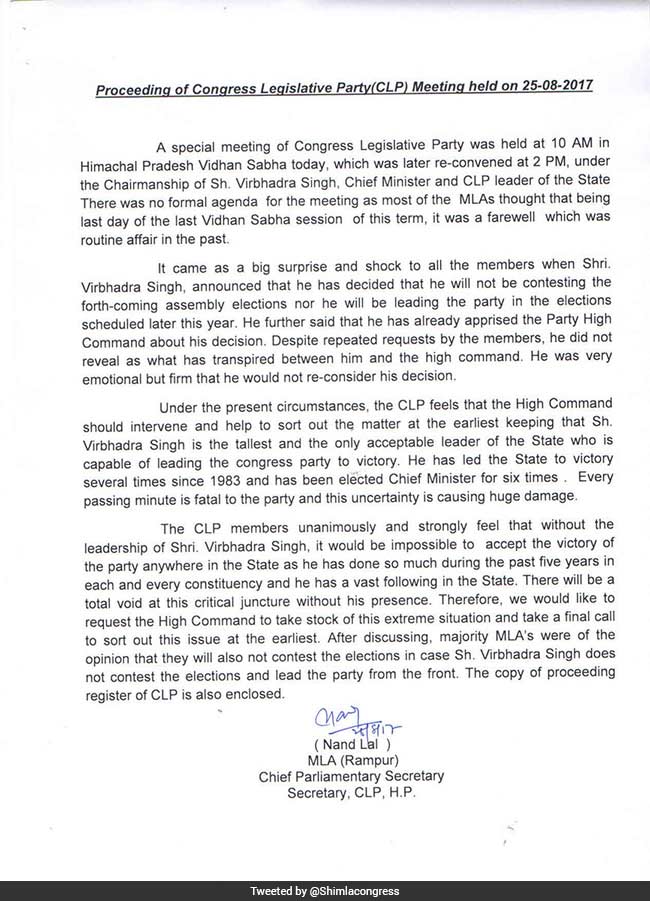 Disclaimer: The opinions expressed within this article are the personal opinions of the author. The facts and opinions appearing in the article do not reflect the views of NDTV and NDTV does not assume any responsibility or liability for the same.
Comments
Rahul GandhiVirbhadra Singh