Speeches at the United Nations General Assembly (UNGA), especially by subcontinental political leaders, have generally been made for a television audience back home. Many of the issues and themes raised have little meaning for those in the room or for a truly global audience, but are meant to make a point to the individual politician's voters and constituents in his or her home country.

It is important to see both Prime Minister Nawaz Sharif's and External Affairs Minister Sushma Swaraj's speeches at UNGA in that broader context. Of course, there is one telling difference - Sharif was much more conscious of his home constituency, reflecting Pakistan's unifocal obsession with India. His speech was entirely limited to India. Frankly, it was targeted at a set of listeners in Rawalpindi and not beyond.

Sushma Swaraj's speech was conscious of the fact that she was expected to rebut Sharif's arguments, but was also careful to present India as a credible and responsible international actor with a greater agenda than just Pakistan-backed terrorism. That is why the first half of her address made expansive references to the global challenge of the Sustainable Development Goals (SDGs).

She linked these to government initiatives in India - from sanitation access to financial inclusion - that mirror the motivations of the SDGs.  In particular, she emphasised India's upcoming ratification of the Paris Climate Agreement. This is important because it acknowledges India's role as a problem solver and as a country willing to shoulder the burden of fighting climate change as an integral part of its own efforts to modernise its economy and society. It is a departure from a negotiating stance that complained - often with substance - about legacy issues and the emissions record of the West but without offering solutions for the future. In this, the Narendra Modi government has moved forward with enlightenment - and Swaraj made that point.

The meat of the External Affairs Minister's speech was, of course, on terrorism. She was careful to locate the threat to India - including most recently in Uri - within a worldwide battle against Islamist terrorism that has stretched from Bangkok to Mogadishu and New York to Kabul. She also added to an Indian foreign policy argument that is increasingly gaining currency about the footprints of a vast majority of terrorist attacks being traced back to Pakistan. 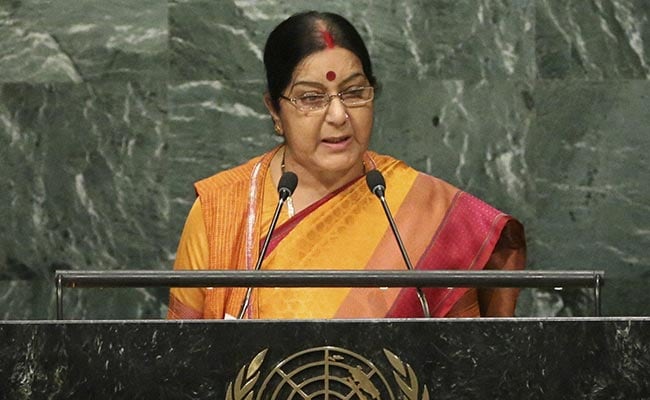 This is not to suggest that all terrorists are Pakistanis, not at all. Yet, the fact is in so many cases, terrorists - even so-called lone-wolf terrorists - have connections with Pakistan: training, funding, logistical support, inspiration, propaganda and so on. Pakistan-backed terror infrastructure may have begun as an anti-India enterprise but now hurts the entire planet.

The "isolation" of Pakistan that both Swaraj and Modi have hinted at or explicitly mentioned in recent days is a reflection of this. It aims at convincing prominent stakeholders in the global community, including every major victim of terrorism, that Pakistan's role, direct or indirect, planned or inadvertent, in promoting terrorism is denied nowhere - except in Pakistan. Pakistan is alone in that it is the planet's Jihad Central. It is also alone in being in denial about being Jihad Central.

From Pakistan's complicity, Swaraj carefully turned attention to the Pakistani government and its agencies and their complicity. She was stating the commonsensical when she asked that cutting, rhetorical question: "Terrorists do not own banks or weapons factories, so let us ask the real question: who finances these terrorists, who arms them and provides sanctuaries? We heard similar questions being asked by Afghanistan from this podium."

Subtly, Swaraj was demolishing and debunking the idea of the terrorist as a "non-state actor". This is a phrase heard so often in Pakistan, right from the time its then president Asif Ali Zardar used it after the Mumbai terror attacks of November 2008. Pakistan seems to insist that random evil networks exploit its territory, target India and other countries (and sometimes ordinary Pakistani citizens too) and mysteriously disappear into secret sanctuaries without the hapless government knowing anything.

Swaraj made the case that the government and the state in Pakistan - with its many black-ops agencies and militia - is not innocent of this process. The compromising of weapons and ammunition facilities of the Pakistani military and of the financial system in Pakistan not just nourishes terrorism but occurs with the knowledge and backing of (sections of the) state.

Indeed, even the slaughter of goats on Id-ul-Zuha (Bakrid) in cities such as Lahore has been numerically much too high in comparison to the local population. This is seen as a mechanism to pour funds into organisations such as Lashkar-e-Toiba, which take the dead goat's hide as "charity" and sell it to the leather industry. A simple act of religious obligation by the devout has been so thoroughly ravaged by terror groups and their fronts. Does the Pakistani state not know - or does it not care?

Sushma Swaraj obliquely raised that question. India will need to do so over and over again in the coming months.