Opinion: The Modi Appeal Is Intact; The Chief Ministers Should Worry BJP

Discomfort for the BJP, hope for the opposition and status quo in states seem to be an appropriate assessment of the recent assembly polls in Haryana and Maharashtra. The two outcomes were realistically analysed by Prime Minister Narendra Modi and BJP chief Amit Shah in the workers' gathering they addressed on the results on October 24 night. The BJP has retained power in both the states, so status quo is maintained. No big surprise. The BJP vote share has increased in both the states. Its strike rate is better in Maharashtra and it has left ally Shiv Sena far behind in both seat share and vote percentage. As the Prime Minister emphasized, the two states were not traditional BJP strongholds and only after 2014, in surprise wins, the BJP captured power in both the states. It was the Modi charisma that won the BJP seats in both the states.

However, from a purely historical perspective, the whole BJP narrative today is about 2014 and after. That is why the discomfort. The BJP could have never  dreamed of a more discredited, disoriented and devastated opposition. Yet, the Opposition tally in the two states has gone up substantially. The BJP can console itself with the thought that after a full five-year term, people have reposed their faith in the party and it has has retained power. This is, however, only a part of the story.

Today in Haryana, the BJP has to share power with Dushyant Chautala's party, which was not the case earlier. In Mahararashtra, the numbers are such that the BJP has to be more careful in dealing with the Shiv Sena, which again was not the case in 2014. With 122 seats in the previous assembly, and fewer seats for the Congress and the NCP, the BJP was in a better position to discard the Sena's shenanigans. The BJP was on better terms with the NCP. Politically, in both the states, the BJP now looks vulnerable.

In practical terms, the Opposition has not gained much more than talking points. The BJP cannot afford to grand stand, especially when two dicey states, Delhi and Jharkhand, are to vote in the next few months. The lesson is, don't take people's goodwill for granted.

Haryana, as Modi said, was always difficult for the BJP. When it fought alone in 2009, before the emergence of the Modi phenomenon, the party did not even manage double digits. It always played second fiddle to INLD and the highest number of seats it contested till 2004 was below 20. And as the PM said, the party had to accept the seats of its major ally's choice. Now the offspring of that party is the junior partner in the BJP government. This is a role reversal. But this is a difficult arrangement, as the BJP has to concede to the demands of Dushyant Chautala. In the previous regime, the BJP chief Minister Manohar Lal Khatter had a free run. If Chautala plays it smart, he will prove a potential threat to the BJP in the long run. This is one discomfort zone. 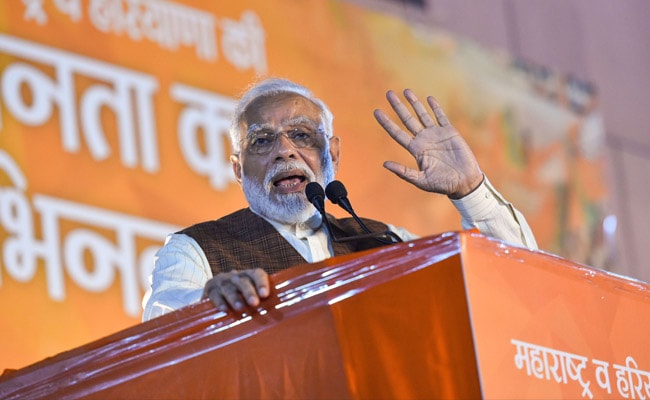 The appeal of Modi is still intact, but the same may not be the case with regional satraps.

Its hilarious poll-time hara-kiri notwithstanding, the Congress comparatively improved its position both in terms of vote share and seats. The BJP vote share increased by over three per cent from 33 to 36 plus, but seats came down from 48 to 40. The independents and Chautala's Jannayak Janta Party also won at the BJP's cost. In the 90-member house, now the BJP on its own has no majority. Seven of its ministers lost, the Jat votes appear to have deserted it and the consolidation of non-Jat votes was only partial.

There was a time in Maharashtra when the NCP seemed to be looking at the BJP. That played as a deterrent to Shiv Sena's recalcitrant behaviour. In the last assembly election, the two parties fought separately and both won more seats. This time, the BJP and the Sena fought together and pulled each other down by 20 seats. Arguably,  the two together should have crossed 200 seats plus. Here, united they fell and divided they stood. How did it happen? Perhaps their ambition to beat each other in the number game to claim Chief Ministership played a role. The atmosphere was good but only in vote share they fared better.

Contesting just 140 of 288 seats, the BJP left almost 20 seats to smaller allies; the BJP's 105-seat haul is creditable. Its strike rate is 30 percent higher than the Sena. The Sena could win only 40 per cent of the seats it contested, whereas the BJP won almost 80 per cent of the seats it contested. Perhaps the party would have done better had it gone into the polls like in 2014. The Sena's overarching ambition to build up Aaditya Thackeray seems to have been rejected by the people. That the NCP and Congress together won over 100 seats should worry the BJP. In just four months after a big Lok Sabha win, the party could not repeat its performance. The appeal of Modi is still intact, but the same may not be the case with regional satraps. In 2014, Modi was the only face. The chief ministerial faces were unknown. Then people voted big for Modi. Now with the chief ministers too pulling the cart, the drag seem to be local. Are they limiting Modi's appeal? Actually, the Chief Ministers may not be as popular as they are made out to be. There is good reason for the BJP to be cautious.