Nitish Kumar, the Bihar Chief Minister whose performance in dealing with the coronavirus pandemic has been distinctly underwhelming, is a lucky man. These days, he is seemingly not accountable to the voters of Bihar but only to his ally, BJP, which rules at the centre. So while Madhya Pradesh, Gujarat, Chhattisgarh and Assam are following the lead of Uttar Pradesh Chief Minister Yogi Adityanath and offering to remove their students who are stranded in the coaching class town of Kota, Bihar refuses to consider the same.

Nitish Kumar's handling of destitute migrant workers (a huge number from Bihar) desperately trying to come back home from states where they were employed when the lockdown was announced on March 25 has been shambolic but has attracted no flak from the Modi Government or even the godi or lapdog media. Pictures of workers crowded into makeshift quarantine camps, clinging to the iron bars of gates, have highlighted Bihar's inadequate effort to rehabilitating them or providing them with basic facilities in quarantine.

Contrast this with the amount of ire and scrutiny that Mahrashtra Chief Minister Uddhav Thackeray gets on a daily basis from the centre and the media as he copes with the highest number of coronavirus cases in the country - if you break your alliance with the BJP, the centre will make sure you hurt. 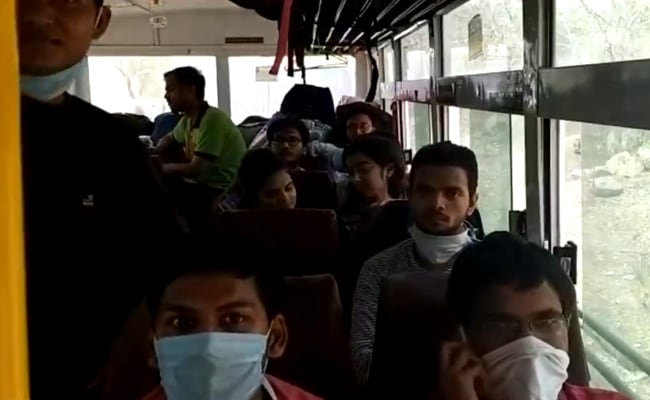 As 300 buses set out of Uttar Pradesh to pick up students stranded in Kota, Nitish Kumar called it "injustice" and against the principle of the nationwide lockdown

Union Home Minister Amit Shah who has been flying under the radar since the outbreak of the pandemic called up Thackeray yesterday (in a much-publicized call) and read him the riot act on the lynching of three men, including two sadhus, in Palghar. And proving that it was politics as usual for the BJP, Shah played the heavy for opposition-ruled states, sending in teams to ensure that the extended lockdown follows the centre's timetable.

While Kerala, West Bengal, Maharashtra and Rajasthan - all ruled by the opposition, got a rap from Shah for their handling of lockdown restrictions, Madhya Pradesh was the only BJP state that made the cut for rebuke. Shivraj Singh Chouhan, who was hurriedly sworn in as Chief Minister after the BJP toppled the Congress government led by Kamal Nath is running a one-man government sans any cabinet minister. This is perhaps a world record in the annals of governance - one politician has subsumed all cabinet portfolios in a state as large as MP and during a crisis of mega-proportions. Only today, five ministers have been inducted in the Shivraj Singh Chouhan.

MP has been one of the worst-performing state in tackling the pandemic but Chouhan has barely received a rap on the knuckles. You will not hear the Modi government complain about the performance of Nitish Kumar and Shivraj Chouhan in handling the coronavirus crisis. "Modi and Shah have realised that they have totally tamed Kumar. He is now Kursi (chair) Kumar, our most obedient ally, who will do nothing to rock the boat. We will soon be fighting the Bihar elections together so why should we showcase his terrible performance in tackling the disease," opined a BJP leader to me.

Kumar used to preen about his moniker of "Suhasan Babu" (Mr Good Governance); he is now fine with just holding onto office, ignoring the needs of migrant workers and students from his state who are desperate to return to their villages and families. All his ambitions now center on getting one more chance to be Chief Minister again for the fourth term. I spoke to several senior officials and politicians in Bihar to get a sense of how the pandemic is being tackled. They were all unanimous that Kumar feels swamped by the magnitude of the crisis particularly the migrant problem and seems paralysed at the thought of action. The absence of headlines questioning his handling of the issue have ensured that Kumar has done nothing except take cosmetic measures - or, worse, brown-nose by stating that the exercise of other states ferrying home their students from Kota is "an injustice to the principle of the lockdown."

A senior official who has worked with Kumar for 15 years said, "I can barely recognize my Chief Minister. He used to be sharp and proactive earlier. He now seems sunk in a torpor and the administration in Bihar, which normally responds to tough leaders who crack the whip, is now taking it easy. This is perhaps the biggest crisis we will ever face and our response is lacklustre".

Another leader from Kumar's party attributed the awful handling to age: "He is 69. All that he wants now is another term."

Former Finance Minister Yashwant Sinha, who is also from Bihar, accused Kumar of allowing a BJP MLA to get back his daughter by road from Kota while other Biharis suffer and are not allowed back. Sinha asked if this was "Sushasan".

While the BJP under Modi and Shah plays politics with the pandemic, Kumar has made the long journey where he will be remembered as a leader whose only goal is to cling to power.