Mask Ripped Off Modi's Attempt At Secrecy In 2 Huge Matters

When the Bharatiya Janata Party released its manifesto for the elections to the 17th Lok Sabha, did you wonder why there was no reference to the Electoral Bonds Scheme, which Narendra Modi's government introduced in January 2018? Or why it was silent on electoral reforms in general, even though the BJP under Atal Bihari Vajpayee and LK Advani was at the forefront of demanding deep-going reforms in India's electoral system? Or why the manifesto of the ruling party was mum on citizens' Right to Information? Lastly, for a party that (in its previous Bharatiya Jana Sangh avatar) had fought valiantly against the Emergency, why did it not even promise to protect freedom of the press? (An important point of contrast: The Congress manifesto made categorical promises on each of these issues.)

If these questions trouble you, you will get all the answers in the way Narendra Modi's government has tried to hide behind the mask of secrecy in two landmark cases that came up before the Supreme Court in recent days. In the Rafale matter, Attorney General KK Venugopal, the government's chief law officer, argued that the fresh documents published by The Hindu and other sections of the press were "stolen" and inadmissible because they were covered by the Official Secrets Act. The court dismissed this argument. It further ruled that the Right to Information Act overrides the Official Secrets Act. More to the point, it strongly batted for the freedom of the press to make such information available to the public.

After a couple of days came the apex court's order on the Electoral Bonds Scheme, which was challenged by the Association of Democratic Rights and the Communist Party of India (Marxist) on the grounds of its opacity, its corruption-promoting character, and the proven fact that it had rendered the playing field grossly non-level in favour of the ruling party. Nearly 95 per cent of all the money (over Rs 2,500 crore) through Electoral Bonds has gone to the BJP. In short, it is not a scheme but a scam. It is a way of legalising corruption with and by moneybags to benefit the party in power.

Frankly, unlike its order in the Rafale matter, the Supreme Court has not fully stood by the cause of democracy and transparency with its order on Electoral Bonds. It has not championed the principle of the citizens' right to know by staying this impervious mechanism of political funding. However, making an important dent in the anonymity that defines the scheme, the apex court has directed all political parties to disclose to the Election Commission, in sealed covers, all the particulars relating to donations received through electoral bonds by May 30, 2019.

Here again, the apex court has disappointed democracy lovers on two counts. First, why by May 30? The entire process of election, including the counting of votes, will be done by then. Therefore, even if some malfeasance about the scheme were to come to light, it would not have any bearing on the crucial debate on electoral funding in the ongoing poll campaign. Second, why, once again, the infamous "sealed covers"? The Supreme Court's order does not explicitly say that the information submitted by the political parties to the Election Commission should be subsequently disclosed to the people of India. In other words, the court has not reduced the secrecy at the heart of this scheme as far as the people, who are the real rulers of this country and to whom all political parties ought to be answerable, are concerned.

The citizens' sense of disappointment is all the greater because of the stark contrast between the Supreme Court's two judgments - one in the Rafale case and the other on the Electoral Bonds Scheme. Even though the Rafale matter came within the ambit of national security, the court ruled that it would examine, on merit, the evidential value of the investigative reports published by the media. In what can have far-reaching positive consequences on many other similar cases, the court went so far as to declare that the dreaded Official Secrets Act cannot be invoked to curtail the right to know that the RTI guarantees to Indian citizens. This being the case, why did the same apex court become somewhat timid in standing by the people in the case of Electoral Bonds?

Unlike the intricacies involved the Rafale matter, Electoral Bonds directly affect the working of democracy in India. Electoral bonds are all about elections, and elections are all about the people's right to choose their representatives. Therefore, the people are the most important stakeholder in elections and their right to know everything about not only all parties but also everything about the electoral system as a whole cannot be suppressed under any spurious argument.

Let us, briefly, look at this ongoing debate over the electoral bonds scheme from the point of view of an ordinary Indian voter. He is passionately interested in the country's politics. She takes pains to keep herself well-informed about all the main issues dominating the elections. The thought of contesting the elections often crosses her mind. But the one question that always nips her desire in the bud is: "How, and from where, will I mobilise the funds required to fight an election?"

Nearly 95 per cent of all the money (over Rs 2,500 crore) through Electoral Bonds has gone to the BJP

No, contesting elections is not for us ordinary mortals, she says to herself. There is no level playing field in our democracy. It's only for those who have crores of rupees, or are lucky enough to be picked as candidates by political parties that have those crores of rupees to spend on their behalf. Precisely because she is an ordinary voter who is madly in love with the concept of democracy, she often wonders how ordinary people like her lived under rajas and maharajas hundreds of years ago with the heavy burden of knowing they had no way of influencing who ruled them and how the new ruler replaced the old one. Now, empowered by India's democratic Constitution, she is keen to know how she can elect the government best-suited to serve the nation and its people. In particular, she wants to know how the wheels of Indian elections move. She sees all her netas flying in private planes from one rally venue to another. She reckons that the cost of organising each rally itself must run into several crores of rupees. Then there is the cost of advertising, hiring an army of workers to do odd jobs, running election offices in multiple locations, and so on. We cannot fault this humble Indian voter if she wants to know where the parties and their candidates get all the money from.

The voter is not only curious, she is also suspicious. "If rich people and big businesses give huge sums to these political parties, won't they demand their pound of flesh? And if they do get their pound of flesh, won't it be at the cost of millions of people like me?"

Besides curiosity and a worrisome doubt, the common voter is also driven by something stronger: her awareness of her own right to know. If democracy is of the people, by the people and for the people, then she won't allow anyone, least of all those in the government, to tell her it's none of her business to demand all relevant information about elections in India.

Shockingly, this is precisely where Attorney General Venugopal mocked the common people of India. With a haughtiness that has been the hallmark of his political boss, the AG said in the Supreme Court: "Transparency cannot be the mantra. Voters have the right to know about their candidates. Why should they know where the money of political parties is coming from? It is not their concern." 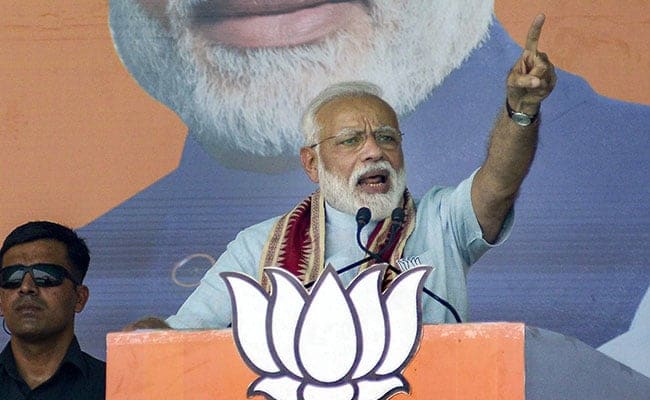 All political parties need money to contest elections, and also to conduct their day-to-day activities. This is why they should discuss, and reach consensus on, far-reaching electoral reforms.

Venugopal had the impudence to insult the electorate like this because, just a few days earlier, Finance Minister Arun Jaitley himself had disingenuously slammed NGOs questioning the Electoral Bonds Scheme for spreading "disinformation". Whether information is disinformation or otherwise can be known only after information is made known to the public. Not otherwise.

Modi and Jaitley owe answers to the people of India on four pertinent questions. One, does the money cease to be 'black' as far as the voters are concerned if they do not get to know who has paid how much to which political party, and if the "link between the donor and the identity of the party is masked" (Jaitley's words)? Two, in a democracy, can the donors' right to privacy override the people's right to know? Three, if "donors fear the consequences of their revealed identities being linked to a political party to whom they donated" (again, Jaitley's words), don't the people of India also have legitimate grounds to fear that the party in power becomes obliged to benefit the donor without any fear of such quid pro quo becoming known to the public? Lastly, can Modi and Jaitley honestly claim that all the money the BJP is using in the 2019 elections is white and nothing is black?

Yes, all political parties need money to contest elections, and also to conduct their day-to-day activities. This is why they should discuss, and reach consensus on, far-reaching electoral reforms, including reforms in electoral funding. However, if there is no transparency and accountability in the way they collect and spend funds, political parties not only scorn the people's right to know and hold them to account, but they also do immense disservice to the culture, processes and institutions of democracy. And when the ruling party itself claims that the people have no right to know, it only advertises its anti-people character. Therefore, the Supreme Court, when it revisits the Electoral Bonds scheme after the elections, has a Constitutional duty to stand by "We the People" (the very first words in the Preamble to the Constitution) and not the corrupt political parties.