Just as foreign stock investors in India try to come to terms with a rudely reimposed 10 per cent tax on long-term capital gains, a bigger shock awaits them. The grandfathering of past returns promised by Finance Minister Arun Jaitley in his budget speech Thursday is missing from the fine print of the bill.

Well, it's not completely missing. The finance bill, which will become law when parliament passes the budget, does clarify on page 14 that the acquisition cost of an asset for the purpose of computing capital gains will be the higher of the actual purchase price or the maximum traded price on January 31. In other words, any gains accumulated before that date won't be taxed when the asset is sold. This is very much in line with what Jaitley said in his speech.

However, there's a catch. The benefit, as it is currently worded, applies only to domestic investors. A separate section of the Indian Income Tax Act, which deals specifically with foreigners, will be amended to reflect the new liability, but with no mention of the grandfathering relief.

The tax guru who alerted me to this oddity is convinced it's a drafting error. However, unless there's a howl of protest from investors, forcing India to tweak the language before the bill is passed, foreign investors will start receiving humongous demands. The taxman will go by the letter of the law -- and not by what the finance minister said in parliament.

Even applied only to future profits, the burden is unjust. For one, the securities transaction tax, which replaced long-term capital gains levies in 2004, hasn't been done away with. So now there's double taxation. Besides, for India-focused foreign funds, internalizing the new levy will mean a lower net asset value. Exchange-traded funds will struggle to replicate returns on their benchmarks. Endowments, sovereign wealth funds and other global investors who don't pay much tax won't be able to seek an offset on their Indian outgoings. All this when the tax is prospectively applied. If it turns out to be retrospective -- like in Delhi's infamous $2.2 billion dispute with Vodafone Group Plc -- there will be chaos. So if you're an investor in Indian equities, do call your tax lawyer, and build some pressure. 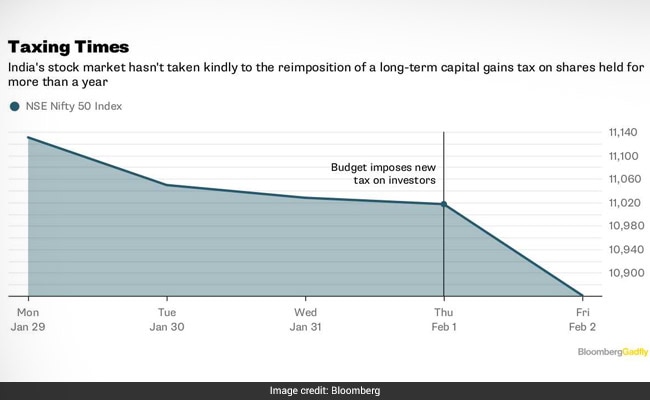 The stock market has risen 265 per cent since March 2009. Handing over a tenth of those gains to Delhi just because a clerk somewhere in the finance ministry has bungled the language in the tax code would be a cruel joke.

(Except for the headline, this story has not been edited by NDTV staff and is published from a syndicated feed.)
Comments
Budget 2018Arun JaitleyLong-term capital gains tax