A scene from Kabhi Khushi Kabhie Gham is being used as a meme on Twitter. 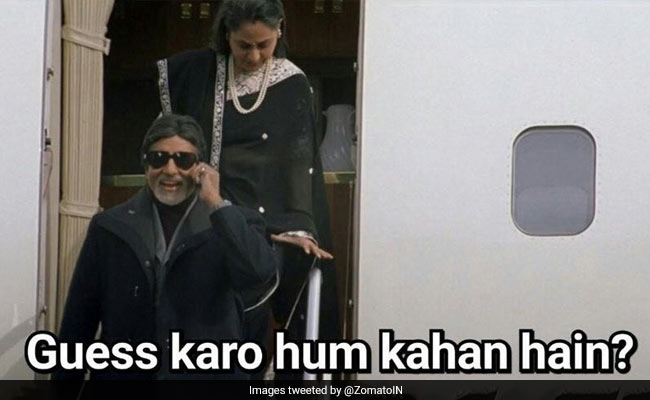 Over the last few days, a scene from the 2001 movie Kabhi Khushi Kabhie Gham has made a comeback in the form of a meme. The scene shows Mr and Mrs Raichand (played by Amitabh and Jaya Bachchan in the Karan Johar's hit family drama) landing in London to surprise their son Rohan (Hrithik Roshan). In the screenshot doing the rounds of Twitter, Yashvardhan Raichand is seen stepping down from his private jet while talking on the phone.

"Guess karo hum kahan hain? (Guess where we are?)" he asks his son in the scene which has now become fodder for a ton of hilarious memes.

Food delivery platform Zomato joined the meme fest this afternoon, sharing their own meme based on the Kabhi Khushi Kabhie Gham scene - this one relating the horror of finding lemon seeds in your poha. Everyone who likes the popular dish is sure to find this meme relatable. Take a look:

The meme has collected over 800 'likes' and a ton of amused comments since being posted on the microblogging platform.

"Hahaha this is so relatable," wrote one person in the comments section. "That's why always use a lemon squeezer," another wrote.

Take a look at some of the other rib-tickling K3G memes that are circulating on Twitter:

When you need a document on urgent basis

Me *stops for a minute to tie shoe laces*

No one :
My socks to me when i need them in morning : pic.twitter.com/dhYobibJi6

This is not the first time that Kabhi Khushi Kabhie Gham has become the subject of social media humour. The movie had earlier returned to public memory earlier this year as Prince Harry and Meghan announced their decision to step away from the royal family, which reminded many of the movie's storyline.