Lady Gaga And Five Former US Presidents Come Together. All For Charity

All five living former US presidents took part in a benefit concert - One America Appeal. 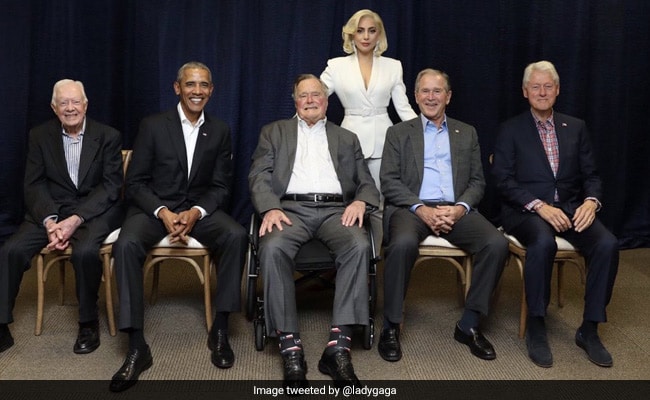 Two days after George Bush, along with four other former presidents of the United States of America, joined singer Lady Gaga for a hurricane relief fundraiser, the 41st president joked on Twitter that he would have sung with Lady Gaga if asked.

"I would have sung w @ladygaga if asked," he wrote on the micro blogging website.

Not sure abt 39, @BillClinton, 43 and @BarackObama, but I would have sung w @ladygaga if asked. Thanks to all for supporting @AmericaAppeal.

While his tweet garnered 73,000 'likes' and a ton of appreciative responses, it was former US President Barack Obama's response that really took the cake.

Promoted
Listen to the latest songs, only on JioSaavn.com
About five hours ago, Mr Obama took to Twitter to let Mr Bush know that he and Lady Gaga could handle the singing, while the other former presidents tagged in the tweet would handle the donations.

His hilarious rejoinder has garnered over 166,000 'likes' in just a few hours, with many praising him for his efforts towards hurricane relief.

On October 21, all five living former US presidents took part in a benefit concert - One America Appeal - in Texas, to raise money for hurricane relief efforts. A photo of the presidents with Lady Gaga, who performed at the fundraiser, went instantly viral with over 1.5 lakh 'likes' and 39,000 retweets.

Nothing more beautiful than everyone putting their differences aside to help humanity in the face of catastrophe. #OneAmericaAppealpic.twitter.com/2TPdPonvWv