In honour of World Breastfeeding Week, we've listed five times when breastfeeding in public was shamed and how trolls were put in their place 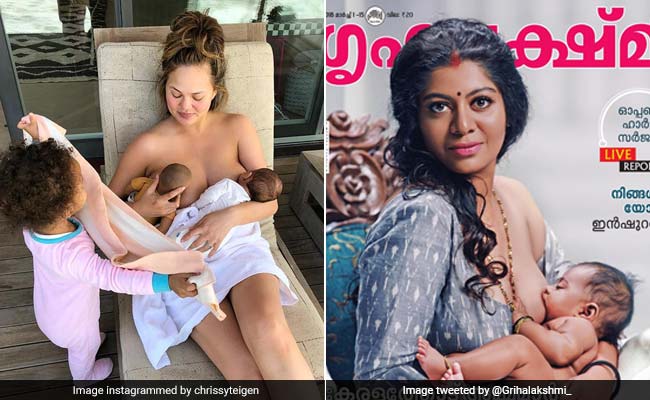 World Breastfeeding Week 2018 is well and truly underway. The first week of August is dedicated to nursing mothers and to raise awareness about the significance breast milk in a baby's life. This year's theme is "Breastfeeding: Foundation for Life". More and more mothers are coming out and talking about breastfeeding. However, every now and then mothers are forced to defend their right to nurse their babies in public. In the recent past, several mothers have courted controversies for either breastfeeding their babies in public or for sharing pictures show them nursing. This is how people have handled the hate, shut down trolls and led the way to normalising breastfeeding.

In honour of World Breastfeeding Week, we've listed five times when breastfeeding in public was shamed and how trolls were put in their place.

Chrissy Teigen:  Most recently, the model and actor was on the receiving end of some rather unwarranted comments on a picture she posted. It showed her breastfeeding her baby, Miles, and pretend-nursing daughter Luna's doll. The picture received a lot of love but also hate from some who asked her to cover up. A few even asked if it was necessary to post a picture such as this. She had this answer for someone who questioned her.

Nah. Just chillin. Posting daily life like I do with anything else. Cooking, playing with dogs, etc. You make feeding a baby big deal because you got weird titty issues. https://t.co/XI97r2FXxI

I don't care to see grainy fireworks, coachella selfies or infinity pool pics but i let people live. calm your tits and scroll on by. https://t.co/k604IcF55a

Gilu Joseph: Malayalam magazine Grihalakshmi's March issue this year featured model Gilu Joseph nursing a baby. The cover created a huge controversy. While some had issues with the cover itself, many questioned the choice to use a model who isn't a mother herself. Felix MA, a tailor, even approached the high court to seek action against the "morally degrading" photo. The Kerala High Court dismissed the petition saying they saw no obscenity in the magazine's cover.

"Don't stare, we are #breastfeeding!"

Grihalakshmi March 1st Issue is out, which speaks about the importance of breastfeeding, and the taboos revolving around it. pic.twitter.com/CtobpNInMO

Christian Serratos: The Walking Dead actor posted a picture that showed her nursing her daughter and hit back at trolls with her caption.

This is my body and my page. So I will post what I want, when I want. Those who disapprove can suck my left tit. #workingmom #chill

Sarah Stage: The Insta-famous fitness guide had the perfect advice for those who got offended by her breastfeeding picture. "... feel free to put a blanket over YOUR head," she wrote on Instagram in January.

She had made a similar post for all the haters back in 2015 as well.

If you don't like this pic, just unfollow me. No need to hate on a beautiful moment with my son #normalizebreastfeeding photo: @funkyfreshkids14

Equinox: Back in 2016, an ad by Equinox gym and fitness centre created a stir online for an ad that showed a model breastfeeding twins. The campaign's tagline said: "Commit to Something." The ad received love and hate in equal parts. The gym also put shamers in their place by replying to comments on their Facebook page. "One of the most distasteful ads I've come across! Shame on you Equinox!" a Facebook user said. The gym promptly replied with: "Breastfeeding (privately or publicly) not equal to distasteful. #CommitToSomething"

Many mothers across the world are trying to normalise breastfeeding. Celebrity mamas are among those encouraging others to take up the practice by sharing their pictures that show them nursing. Take a look at celeb mums who've shared their photos to take the dialogue on breastfeeding further.