"I demand that you never come to my restaurant again," she yelled before dropping his work to the ground. 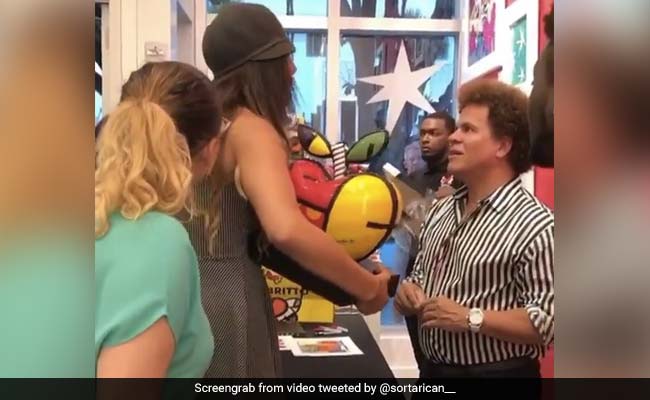 A restaurant owner was filmed yelling at artist Romero Britto.

A restaurateur in Florida was filmed yelling at Brazilian artist Romero Britto and smashing one of his artworks in a video that has gone massively viral online. Brazilian news outlet Globo, the restaurant owner broke the expensive artwork because the artist was allegedly disrespectful to her staff.

In a video shared on social media this Saturday, the woman was seen throwing a porcelain piece known as the Big Apple on the floor before shouting, "Never go to my restaurant or offend my team. I respected you," in Portuguese.

According to Le Parisien, the woman told Mr Britto: "I demand that you never come to my restaurant again, nor offend my staff, ever again." After the tirade, she smashed the artist's artwork that she had brought along. It had reportedly been gifted to her by her husband.

Brazilian artist Romero Britto visited this woman's restaurant and treated the employees poorly. She then went to his Miami exhibit to purchase and destroy one of his works.
“Never go to my restaurant and offend my people. I respected you as an artist”pic.twitter.com/0v3ytxjzDC

A video of the incident has collected a whopping 6.4 million views on Twitter since being shared this Saturday. The incident took place during a meet and greet event hosted by Romero Britto at his gallery.

The restaurant, Tapelia in Miami Beach, Florida, also posted a video on its Instagram page this Friday where the restaurant owner addressed the artist and said: "You went to my restaurant, you booked a breakfast for 20 people for $8, which is cheap, and on top of that you asked us for a discount. You humiliated my staff, you asked them to turn off the music, you asked them not to speak. [...] It was humiliating. I thought you were an honest and respectable person but you lacked humility." That video has since been taken down.

In a statement to Estadao shared this Saturday, Romero Britto denied the allegations leveled against him and said that the incident had taken place in 2017. "I do not admit disrespect and I never intended to disrespect anyone. The internet is often unfair and people are not concerned with the truth. They like confusion, drama, negativity, to judge without analyzing the facts," he said.