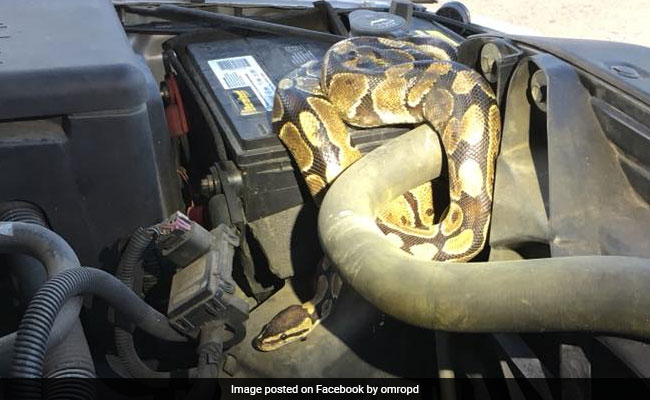 The snake was later identified as a ball python.

A woman in Wisconsin, USA, would never have suspected the reason behind her car troubles - a large snake under the hood. According to a Facebook post by the Omro Police Department, officials were called in to assist a motorist on Wednesday at around 6.50 pm. The driver had pulled over because her SUV was "running strangely." When she opened the hood to investigate, she was stunned to find a large snake in the engine compartment.

Two officials - Officer Peeters from Omro and Lieutenant Sauriol from Winneconne - arrived at the scene and attempted to remove to remove the snake, which was later identified as a ball python. However, their attempts were unsuccessful and a snake catcher had to be called in.

"Lt Sauriol had a good grasp on it but they are incredibly strong!" wrote the Omro Police Department in their Facebook post.

The Facebook post and photos of the python have gone viral with over 2,000 shares and thousands of comments.

"Oh my gosh! I am never opening the hood of my car again!" writes one commenter. "Great story, people helping people (and a snake)" says another.

According to local reports, the 4-foot python was rescued by snake rescuer Steve Keller, who has now taken custody of it. It was later found to be a pet snake that had escaped its owner. However, since keeping exotic pets is illegal in Omro, the snake's owner will not be allowed to have it back.

This is not the first time that a snake has made a car its place of refuge. In June this year, a woman in Virginia was driving when she saw a snake slithering out of the car's air vent.