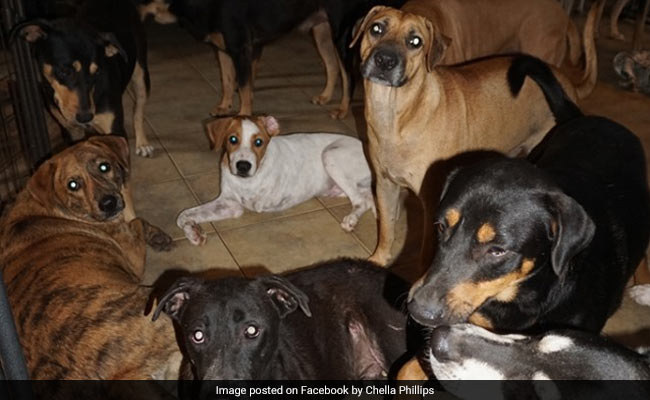 A picture shared by Chella Phillips on Facebook shows dogs inside her home.

Social media users are full of praise for a woman in the Bahamas who opened up her home to 97 dogs to protect them from Hurricane Dorian. Chella Phillips, manager of The Voiceless Dogs of Nassau, Bahamas, shared pictures on Facebook which show her house packed with dogs of all sizes and shapes. The organisation works to pair up local dogs of the island with adoption and rescue agencies in the US.

"97 dogs are inside my house and 79 of them are inside my master bedroom," Ms Phillips wrote on Sunday. "It has been insane since last night... but at least they are respecting my bed and nobody has dared to jump in."

She added that music was played and the AC was switched on for the dogs.

Hurricane Dorian, classified as a Category 5 storm, unleashed massive flooding and powerful winds in the Bahamas on Sunday.

"Each island has an abundance of homeless dogs, my heart is so broken for the ones without a place to hide a CAT 5 monster and only God can protect them now," Ms Phillips said in her Facebook post. Take a look at it below:

Since being posted online two days ago, the post has received over 44,000 'shares' and more than 64,000 reactions. It has also been inundated with comments from well-wishers and people donating for the dogs.

"You are the kindest, most loving person I know. Thank you for doing all you can for all the animals who can't help themselves," wrote one person in the comments section. "A true hero," said another, while a third wrote "Prayers for you and all the furbabies".

On Tuesday, Hurricane Dorian weakened slightly as it moved from the Bahamas to the southeast coast of the United States. The states of Florida, Georgia and South and North Carolina are expected to be hit by the storm, and millions of coastal residents have been evacuated.