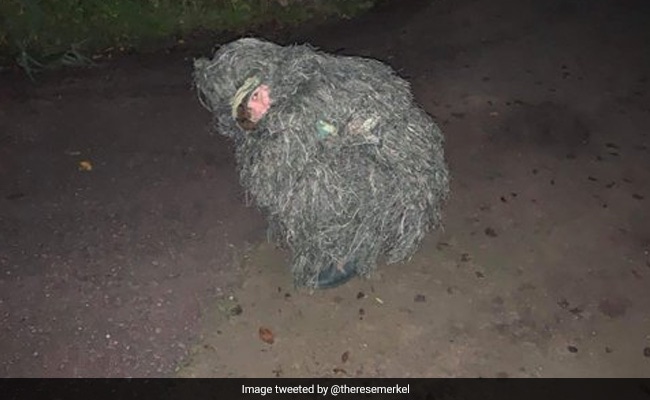 Therese Merkel dressed up as a bush to click her sister's proposal pics.

This scene would not look out of place when played out on the big screen as part of a romcom. This, however, is no funny movie. It actually happened in real life. An American woman 'went undercover' to sneakily capture pictures of her sister's proposal - by dressing up as a bush. Her hilarious stunt has now gone viral online, making thousands of social media users laugh out loud.

Therese Merkel took to Twitter on Tuesday to share how she dressed up as a green shrub to camouflage herself as she covertly clicked photos of her sister's proposal. She shared three pictures with her Twitter post. Two of them show her dressed up in a bush costume, and the third shows her sister's boyfriend proposing to her.

"Sister got engaged this weekend and I dressed as a bush in the wilderness to watch/capture the moment," Therese wrote. "We are 1 yr apart.. why are our lives so different rofl."

Sister got engaged this weekend and I dressed as a bush in the wilderness to watch/capture the moment. We are 1 yr apart.. why are our lives so different rofl pic.twitter.com/cE14RBZ9CL

Her post has gone viral with over 21,000 'retweets' and 1.7 lakh 'likes'. In the comments section, many have applauded Therese's dedication towards getting the perfect proposal pic.

u the real catch.

Lmao I wish I had a sibling like this

A lot of people also tagged their friends and sisters, asking them to do something as 'extra'.

@cbstamper I expect the same effort from you

Two years ago, a Texas woman had gone viral for disguising herself with a fake moustache to spy on her friend's date.

What do you think of Therese Merkel's stunt? Let us know using the comments section.