Woman Discovers New Species Of Spider In Backyard. It's Blue With 8 Eyes

A new species of Jotus brushed jumping spider was found in Australia. 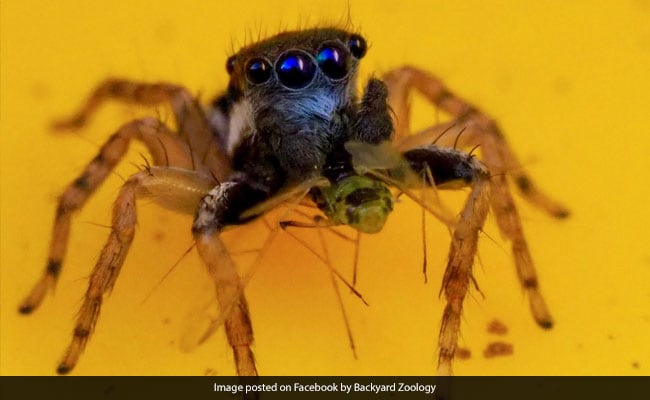 A picture of the jumping spider, taken by Amanda De George.

A woman in Australia discovered a new species of spider right in her backyard. Amanda De George first saw the eight-eyed creature over 18 months ago, but it was only recently that she managed to find the spider again, capture it and send it to an expert for identification, according to the Daily Mail.

Ms De George, a nature lover from Thirroul, New South Wales, had no idea that she had come across a new species of Jotus brushed jumping spider one year ago. The spider had a vibrant blue face with eight eyes. She quickly snapped some pictures of the spider and uploaded them on the Facebook group 'Backyard Zoology'.

"So I was taking out the recycling like a good human when I spotted a tiny but totally handsome Jumping Spider on the lid of the bin," Ms De George wrote while sharing the pictures, describing the spider as having "massive blue eyes".

According to ABC News, the post was brought to the attention of spider expert Joseph Schubert, who asked De George to catch the spider. Finally, after months of searching, she came across the spider again two weeks ago.

Ms De George managed to coax it into an empty container. She also found another spider, and that went into a separate box because "jumping spiders can eat each other".

The two spiders were sent to Mr Schubert in Melbourne, who specialises in jumping spiders. The spider will be formally named and described when Museums Victoria opens its labs again.

Ms De George said that helping identify a new species of spiders was very exciting. "Honestly it is so exciting! It feels so nice to be able to contribute something to science," she said.

"I'm just an amateur nature lover and could never have imagined that this is something I would or even could do."