She Sings On A Street In Peru, Rocking Her Baby In Her Arms. It's OK To Cry

"This video is so poignant," wrote one person in the comments section 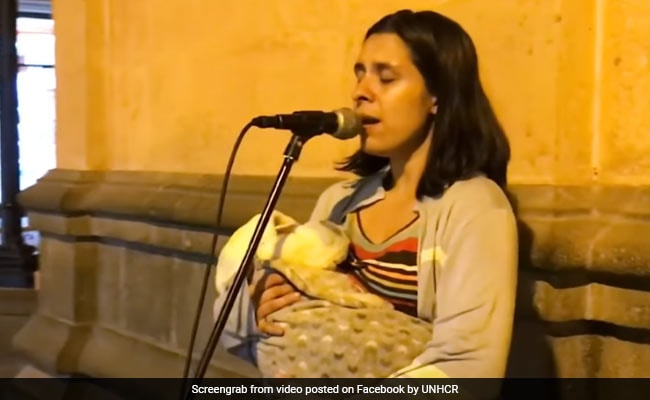 A video shared online shows a mother singing on the street with her baby in her arms.

She is among the thousands of Venezuelans who fled their country's economic crisis and arrived in Peru. For two hours every day, she stands on the city streets of Peru with her baby in her arms, singing in hopes that passersby will give her their spare change.

A video of her performance, evocative and melodious, was shared by United Nations High Commissioner for Refugees on Tuesday. It shows the unnamed singer rocking her 9-month-old baby as she croons into a microphone. While some pedestrians stop to drop change into a bowl, others walk by with barely a glance as she halts to kiss her baby.

"A comforting melody you need to hear today," wrote UNHCR, the UN Refugee Agency, while sharing the one-minute-long clip on Facebook.

The powerful video seems to have struck a chord with viewers. Since being shared online, it has collected over 34,000 views and a number of heartfelt comments.

"This video is so poignant," wrote one person in the comments section. "It brought tears to my eyes...a brave lady," said another.

According to Yahoo News, more than 8.5 lakh Venezuelans have arrived in Peru in recent years. In June this year, Peru clamped down on immigration, requiring migrants have passports and visas in order to stay in the country.

The singer who featured in UNHCR's video is among a number of refugees who rely on the arts to sustain themselves. Cronkite News reports that Venezuelans in Peru sing on the streets, dance, and teach classes in symphony halls, using their talents to make ends meet in a new country. Recently, Venezuelan migrant Reymar Perdomo's song about leaving her homeland had gone viral, touching millions across the world.