The photo was taken during Friday's match between Chennai Super Kings and Royal Challengers Bangalore. 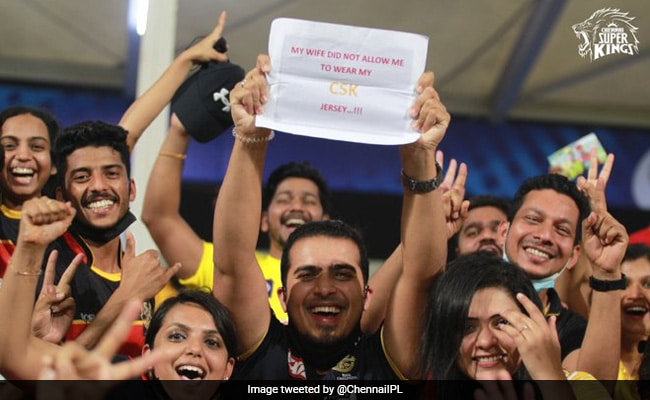 A Chennai Super Kings fan was spotted wearing the colours of their rival team.

No T20 tournament in the world seems to match the gusto of the Indian Premier League (IPL). The unmatchable fanfare around the league makes every game a memorable affair. Mostly, all eyes are on the star players of both teams. But this time we have a special mention. A fan, who attended Friday's match between Chennai Super Kings (CSK) and Royal Challengers Bangalore (RCB), has stolen the show. He has gained much attention on the Internet because of his placard during the match. A photo uploaded by CSK's official Twitter handle shows the man wearing an RCB jersey. However, his placard reads, "My wife did not allow me to wear my CSK jersey."

Reacting to the hilarious banner, CSK wrote, "Love is colour blind." The post has received more than 17,000 likes on Twitter.

Here's how fans gushed about the photo. Some simply dropped laughing emojis in the comments. Others gave a shoutout to CSK fans. A user wrote, "Yellove fan spotted in RCB jersey."

Another hailed CSK for caring for their fans. They wrote, "None can match the way you connect with fans. Proud of you, Leo."

None can match the way you connect with fans :-) Proud of you Leo #CSK

A user indirectly praised the CSK team for their consistently good performance. "Tell her that jersey need not be changed every season if it is CSK, " it read.

This user left a poetic remark. "CSK is in the hearts and not just jersey," the Chennai fan wrote.

#WhistlePodu CSK is in the hearts and not just jersey ???? #CSKvKKR

Some  called CSK the "mass team."

CSK is the Mass Team...Thala .

However, a few users came with a backlash. They called out the fan for not being loyal to RCB. One user wrote, "Aise bhi kya fan jo apni team ko khul kar support bhi na kar paayein [What kind of a fan are you who can't even support his team]?"

As for the Friday match, MS Dhoni-led Chennai Super Kings won the game by six wickets. Currently, CSK are leading the table with 16 points.

Japan Princess To Give Up $1 Million Payment In Controversial Marriage