Raghav Chadha assumed office as Vice Chairman of the Delhi Jal Board. 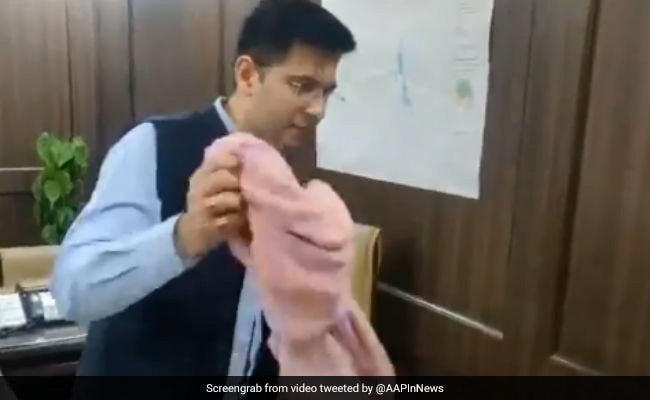 A video shows Raghav Chadha removing the towel from his chair before sitting down.

In what was seen as a rejection of VIP culture, Aam Aadmi Party's Raghav Chadha removed a towel from his chair soon after assuming office as Vice Chairman of Delhi Jal Board. A video shared this morning on Twitter shows the 31-year-old MLA removing the towel from his chair before sitting down.

The video was shared on the microblogging platform by 'AAP In News' - the Aam Aadmi Party account dedicated to updates about the party.

"Delhi Jal Board Vice Chairman @raghav_chadha removes towel (a symbol of VIP culture) from his chair as soon as he assumes his office," they wrote while sharing the 12-second video, which has been viewed over 12,000 times on Twitter.

Delhi Jal Board Vice Chairman @raghav_chadha removes towel (a symbol of VIP culture) from his chair as soon as he assumes his office. pic.twitter.com/cNfeWGSvXi

The video has collected a number of reactions. Several social media users praised Raghav Chadha for removing the towel from his chair in office.

More power to you chadda ji👏✊

Others criticised it as a publicity stunt.

AAP has prided itself in being a party of common men and has repeatedly said it will end the notorious VIP culture in Delhi. When he came to power after a landslide win in 2015, party chief Arvind Kejriwal had said that he wanted to end VIP culture in Delhi. "Do you like it when a minister blocks a road... and the car's siren beeps? We want to end VIP culture," Mr Kejriwal had said after taking oath as Delhi Chief Minister.