Which Animals Are Smartest: Dogs, Cats, Or ... Raccoons?

According to a new study, the best way to measure cognitive ability is to tally each animal's neurons. And, surprisingly, if you were to look only at neuron count and brain size, you might mistake the raccoon for a small primate. 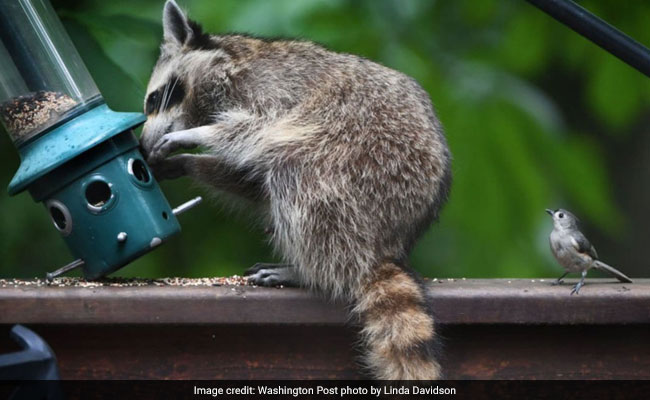 In the battle of the brains, raccoons measure up to dogs - by one measure, at least

Cat people and dog people have long sparred over which species possesses the best brains.

Team Cat points to the felines' self-reliance as a sign of intelligence. The animals can hunt, which isn't so great for wildlife but does showcase the cunning predator still lurking within lap kitties. Cats also clean themselves, relieve themselves in tidy litter boxes - or even toilets - and are generally better at food portion control than their canine housemates.

But as it turns out, all of this resume listing may be unnecessary. According to a new study published in Frontiers in Neuroanatomy, the best way to measure cognitive ability is to tally each animal's neurons.

Neurons are cells that communicate via electrical charge and populate the brain and central nervous system. They are the units that process information. While measuring intelligence is an incredibly difficult affair, Suzana Herculano-Houzel, a Vanderbilt University neuroscientist, and her colleagues believe their method of quantifying neurons in an animal's brain, especially in the cerebral cortex, is the most accurate tool for judging its capacity for complex thought.

So which animal comes out ahead in the Great Neuron Census? Brace yourselves, Team Cat.

"Dogs have about twice as many neurons as cats," said Herculano-Houzel, who wrote a book about brains called "The Human Advantage."

But wait: The average dog is larger than the average cat. Isn't it a given that dogs would have larger brains and therefore more neurons? This is where things get interesting.

The study found the overall mass of one's gray matter is not what's important. In addition to the dog and cat, the team examined brains from a domestic ferret, a banded mongoose, a raccoon, a striped hyena, an African lion and a brown bear. While the brown bear's brain was three times as large as the dog's, the dog's had more neurons. In fact, the brown bear's neuron count was similar to that of the cat, an animal whose brain is about 10 times smaller.

To put some numbers in play here, a cat has 250 million neurons in the cerebral cortex to a dog's 530 million. Both species are dwarfed by the average human, who clocks in at 16 billion cortical neurons.

But one of the more surprising insights from the research has nothing to do with cats, dogs or people. It's about raccoons, those "trash pandas" that have long been dismissed as vermin or vectors for the rabies virus. Within the raccoon's cat-sized brain lurks a dog-like number of neurons. So many, in fact, that if you were to look only at neuron count and brain size, you might mistake the raccoon for a small primate.

"And that is saying a lot," Herculano-Houzel said. "Because something that we found previously is that there's a huge difference between how many neurons you find in a primate or in a non-primate brain of the same size."

Jessica Perry Hekman, a veterinary geneticist at MIT and Harvard's Broad Institute, said there are a number of reasons to be cautious in interpreting the study's results. For one, she said, the link between neuron numbers and intelligence is anything but proven.

"Which isn't to say it's wrong," Hekman said, "but that it's definitely something that they're just starting out with and collecting information on."

The study also had a small sample size. With the exception of dogs, who contributed two brains to the study, each of the other species was represented by just one brain. (Good brains are hard to come by, Hekman acknowledged.)

The study's comparison of domesticated, wild and zoo animals could also have an important influence on the results, Hekman said. Researchers have found experience affects brain development, especially in early life: Rats raised in pens with lots of enrichment, like toys or complicated territory to explore, develop more synapses, or connections between neurons, than rats raised in barren pens. So it's possible the life history of the analyzed hyena or mongoose played a role in its brain anatomy. Hekman said she thinks an animal's number of synapses, rather than neurons, might be a more accurate measure of its intelligence.

But the biggest problem, and the one both Hekman and Herculano-Houzel are trying to solve, is intelligence is a tough nut to crack. In fact, it may be several different nuts. Each species has distinct skills and challenges.

"I'm not even really sure we should call intelligence one trait," Hekman said. "It's a lot of different things."

Even if this paper is not the definitive guide to animal intelligence, it reveals some interesting data. For instance, why did the larger carnivores like the lion and bear have fewer neurons than we'd expect for animals of their size?

According to Herculano-Houzel, it's not that larger predators can get away with being stupid. At the study's outset, she and her team guessed predators would have significantly more neurons than the prey they hunted, because they reasoned that hunting is a more challenging way of life. Most lion hunts end in failure, for instance, and every day is a battle to consume sufficient calories to make it to the next kill. A wildebeest, on the other hand, can fill up on plants at its leisure and form large herds that minimize its chances of turning into lion lunch.

Instead, the team found lions and hyenas had similar ranges of neurons as prey animals of relative size, like the blesbok and kudu.

But wouldn't it make sense for evolution to produce increasingly brainy predators, whose cunning would translate into catching more prey? Well, yes, but even evolution has to work on a budget.

"Neurons, especially neurons in the cerebral cortex, are extremely energetically expensive," Herculano-Houzel said. "There is a point where you cannot afford both a huge body and a large number of neurons."

The science of comparing animals is still evolving, and Herculano-Houzel said it would be great to consistently incorporate neuronal information with studies of behavior. It would also be valuable to count the neurons of many brains from the same species to get a better range, as Hekman suggested. The dog neuron counts came from just two animals, a mixed breed and a golden retriever. Who knows what sorts of differences one might find between Chihuahuas, mastiffs and corgis?

For the moment, it seems the jury is still out on whether dogs or cats are smarter - not that a few million neurons would change a pet owner's mind anyway.

Promoted
Listen to the latest songs, only on JioSaavn.com
Now, who wants to start rooting for Team Raccoon?