William Makes Dosa In Mumbai, But Kate Refuses A Bite After watching a demonstration, William gladly poured some batter and waited for the Dosa to cook before tasting a bit and declaring it "not bad", although the Duchess could not be tempted with a bite.

Mumbai: Britain's Prince William helped cook a Dosa in Mumbai on Monday after he and wife Kate met perhaps their biggest fan in India, making the 93-year-old's dream come true.

The Duke of Cambridge met entrepreneurs and inventors before getting his chef on using an automatic device called DosaMatic.

After watching a demonstration, William gladly poured some batter and waited for the Dosa to cook before tasting a bit and declaring it "not bad", although the Duchess could not be tempted with a bite.

Day 2 of their tour of India came after the royal couple met Boman Kohinoor, owner of Mumbai's most famous Parsi cafe, on Sunday evening.

Kohinoor, 93, has a strong claim to be India's biggest fan of the British royal family -- giant cardboard cutouts of William and Kate adorn his restaurant . His dream came true after William and Kate were made aware of a social media campaign with the hashtag #WillKatMeetMe. "TRH (their royal highnesses) were very touched and invited him to their hotel before last night's charity gala," Kensington Palace tweeted on Monday, accompanied by a photo of them meeting Kohinoor.

William also got behind the wheel of a racing car simulator on Monday, as he and Kate chatted with entrepreneurs at Social -- a trendy meeting place in Mumbai. 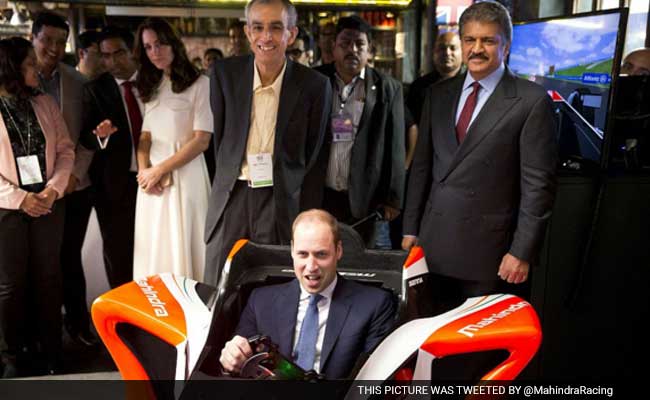 William rounded off the morning's event by making a short speech to launch an awards programme for Indian startups called the Tech Rocketship Awards.

After walking onto the stage he started by bowing slightly as he put his hands together and said "Namaste (hello), Mumbai".

"Catherine and I are very impressed by the energy and ideas we have just seen. Being here today, it is clear that India is leading the way in so many areas of innovation and technology," he said.

The 33-year-old then pressed a button to officially launch the programme, setting off exploding confetti.

"All this innovation and we get this!" William quipped to laughing quests.

The couple later flew to New Delhi where they will have lunch with Prime Minister Narendra Modi on Tuesday before heading to Kaziranga National Park. The couple will also spend two days in Bhutan, where they will meet the Himalayan nation's king and queen and embark on a six-hour hike.

They will return to India to finish their tour in Agra on Saturday by visiting the Taj Mahal.