When Raveena Tandon Gifted Herself A Sports Car At 18

"#Throwback when I bought my first swanky sports convertible at 18," Raveena Tandon captioned the picture. 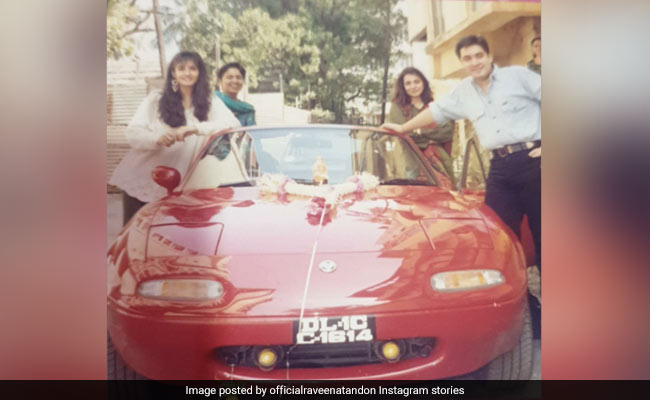 Raveena Tandon shared a throwback photo from the time she gifted herself a sports car.

Raveena Tandon, 46, took a trip down memory lane on Thursday as she shared a throwback photo from the day she bought her first "swanky sports convertible". The actress posted the picture to Instagram Stories, revealing that she was just 18-years-old when she gifted the car to herself. The pic shows a teenaged-Raveena Tandon and her friends posing next to the red car.

"#Throwback when I bought my first swanky sports convertible at 18," she captioned the picture. "Gifted it to myself. At second hand," she added. In the picture, Raveena Tandon is seen dressed in a white top with her hair worn loose. Three other people appear in the frame with her, with the sports convertible taking centre stage. 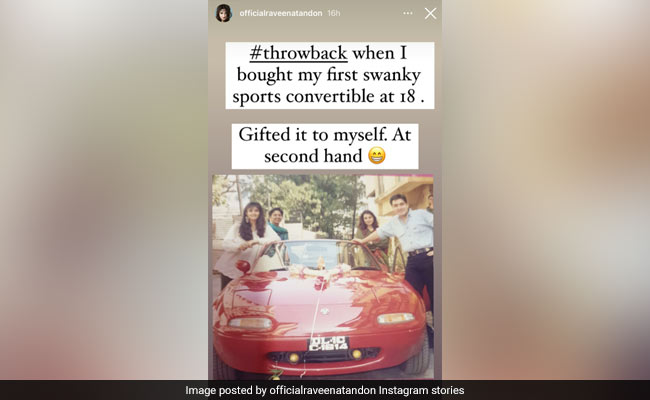 Raveena Tandon, who landed her first acting role in a Sunsilk commercial at the age of 15, is a self-confessed car enthusiast. Her fascination with cars began when she was a child.

"I still vividly remember my dad's Volkswagen Beetle. I used to adore that car. Once I came back from school and saw that my father has sold the car! I cried so much, that my father had to get it back," Raveena told DNA in a 2012 interview. In the interview, she also revealed that the first car she bought with her own money was a Maruti 800.

Raveena Tandon is the daughter of director Ravi Tandon. She made her big screen debut with the film Patthar Ke Phool in 1991. She later adopted two daughters as a single mother in the 1990s, before marrying Anil Thadani in 2004.

Raveena Tandon will next be seen in Yash's KGF: Chapter 2, Directed by Prashanth Neel, the film also stars Sanjay Dutt.