In 2009, Mallika Sherawat had "fun at a fancy event" with Kamala Harris, who was then District Attorney of San Francisco. 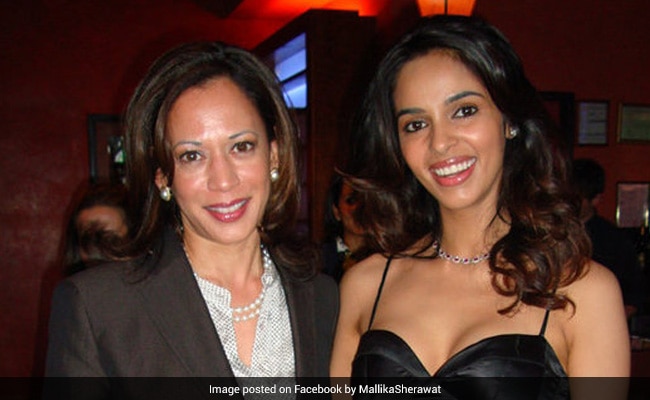 Mallika Sherawat shared a picture with Kamala Harris a decade ago.

Long before Kamala Harris made history as the first-ever woman to be elected Vice President of United States Of America, her meteoric rise to power had been predicted by a very unlikely person - Bollywood actor Mallika Sherawat. In 2009, Mallika Sherawat had "fun at a fancy event" with Kamala Harris, who was then District Attorney of San Francisco.

A 2009 tweet from the actor - where she refers to Ms Harris as the woman who "could be US President" one day - has now been rediscovered by Twitter users and is going viral online.

"Having fun at a fancy event with a woman who they say could be US President, Kamala Harris. Chicks rule!" Mallika Sherawat had written in a tweet dated June 23, 2009.

Having fun at a fancy event with a woman who they say could be US President, Kamala Harris. Chicks rule!

Ms Sherawat's remarkable foresight has left people stunned, with many comparing her to Jofra Archer, whose six-year-old tweet which simply read "Joe" had become the talk of the town during the US presidential election.

"Nostradamus! WHAT !" wrote one Twitter user, while another said, "Amazing foresight."

In the 2011 film Politics Of Love, Mallika Sherawat played the role of an Indian-American, Democratic campaign worker who fell for an Republican.

Kamala Harris, 56, is set to become the first woman, the first Black woman and the first woman of Indian heritage to become Vice President of the United States. This makes her the automatic frontrunner in the race for the 2024 or 2028 Democratic nomination for president.

In her acceptance speech, Ms Harris recalled her mother - an immigrant who came to California as a teenager - and recognised the contribution of women "who fought and sacrificed so much for equality and justice for all".