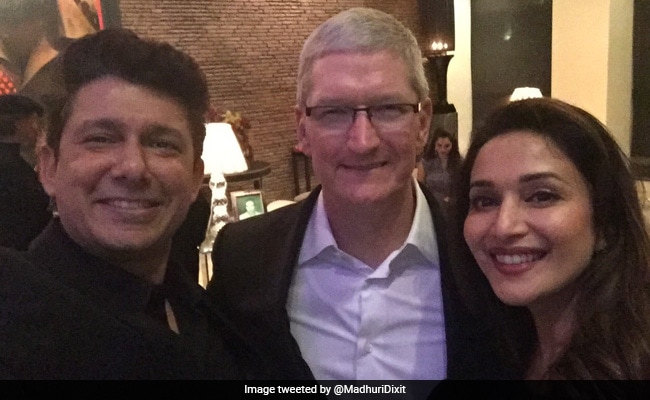 Actress Madhuri Dixit's husband, Dr Shriram Nene, took to Instagram this morning to share a throwback picture with Apple CEO Tim Cook. The picture shows Tim Cook flanked by Madhuri Dixit and Dr Nene - all three smiling for the camera. It was taken during Tim Cook's 2016 visit to India, when superstar Shah Rukh Khan had hosted a dinner party for the business executive at his residence Mannat. For Dr Nene, an "Apple fanboy", it was an honour to meet the Apple CEO. In his Instagram post, he revealed that the Apple CEO shared some insights on his journey with the company during their meeting.

"Great Leaders lead great companies," wrote Dr Shriram Nene while sharing the throwback picture. "Was an honor to meet Tim Cook and get some colourful insights on his journey with Apple some years ago. How it has grown since then," he added.

The picture has racked up hundreds of 'likes' and several comments since being posted this morning.

Apple Inc Chief Executive Tim Cook visited India in the May of 2016. After landing in Mumbai on a private jet from China, he visited the city's famed Shree Siddhivinayak temple.

The following day, Shah Rukh Khan hosted a dinner party for Mr Cook at his Mumbai residence. The party was attended by a galaxy of Bollywood celebrities, including Aamir Khan, AR Rahman, Emraan Hashmi and the Bachchans.

Thk u all for coming & making @tim_cook & his wonderful team feel the warmth & love of India.Mr.Cook u r a rockstar! pic.twitter.com/e7HdJUZ0Hp

At the time, Madhuri Dixit had shared a photo with the Apple CEO - the same picture that her husband reposted this morning. "It was a pleasure meeting Tim Cook and the Apple team at @iamsrk's house yesterday. Loved seeing everyone!" Madhuri had written at the time.

It was a pleasure meeting Tim Cook and the Apple team at @iamsrk 's house yesterday. Loved seeing everyone! pic.twitter.com/Aco8aLsddB

In terms of work, Madhuri Dixit was last seen in the 2019 film Kalank. She is currently a judge on the reality show DanceDeewane.