When It Comes To Pizza Toppings, Canada's PM Justin Trudeau Is #TeamPineapple 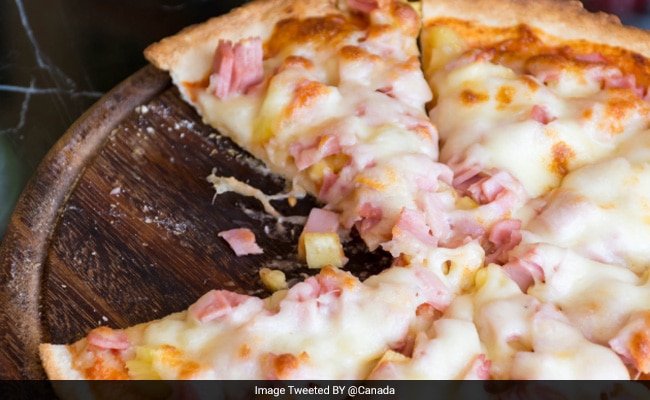 Pineapple-pizza-gate. It's the controversy that refuses to die down. Iceland's President Gudni Johannesson recently sent the Internet into meltdown mode after claiming he was "fundamentally opposed" to pineapple as a pizza topping and would ban it if he could. "I like pineapples, just not on pizza," President Johannesson was later forced to clarify in a Facebook post. "I do not have the power to make laws which forbid people to put pineapples on their pizza." But, did you know that the pizza topping was actually invented in Canada? And it turns out the country is #TeamPineapple all the way!

It's savoury, it's sweet - Canadian invention #pineappleonpizza can't be beatpic.twitter.com/GDHRZU0rXQ

Then, Prime Minister Justin Trudeau threw his weight behind the cause:

@JonWiseman I have a pineapple. I have a pizza. And I stand behind this delicious Southwestern Ontario creation. #TeamPineapple@Canada

Historica Canada, an organisation that builds awareness of Canadian history, claimed the topping was part of the country's heritage:

Fans of the pizza topping were thrilled:

I didn't know it was possible for me to like Canada anymore than I already do. Pineapple belongs on pizza, esp when coupled w jalapeños https://t.co/86nvfOXNqi

Some other Canadians less so:

@HistoricaCanada we shouldn't brag about that. It's like bragging about pickles and ice cream

Some tweeple thought the issue would escalate:

teacher: who can tell me how world war 3 started?

Meanwhile, someone actually had a Hawaiian pizza delivered to Iceland's embassy in London:

Many thanks to the loyal supporters of #pineappleonpizzas for this delivery today, along with a clear message! pic.twitter.com/sljYEJWRoR

In case you were wondering, the Hawaiian pizza topping was actually invented by a Greek-Canadian called Sam Panopoulous in 1962. He says he never imagined that 55 years later, his humble creation would still be making headlines. "Pizza in those days was three things: dough, sauce, cheese, and mushroom, bacon, or pepperoni. That was it," says Panopoulos. "You had no choices; you could get one of the three (toppings) or more of them together." At his small restaurant, Panopoulos says he often threw together combinations for toppings to see what worked. Canned pineapple chunks were a household staple at the time. One day, he took a can, drained it, and threw the pieces of fruit on a pizza. And that's how the Hawaiian pizza was born!