Residents in Tredegar rallied around to help the cat down. 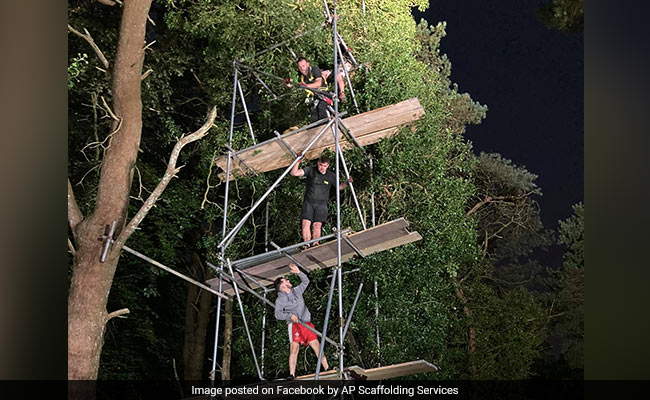 Cookie the cat was rescued from a 40-foot tree in Tredegar.

In an epic rescue mission, almost an entire town in Wales came together to help a cat stuck in a tree. Residents in Tredegar, in the south east of the country, rallied around the 40-foot tree for four days last week to rescue the feline, according to Metro News.

Leanne Skinner, 36, told Metro News: "It all started on Saturday when I went for a walk with my friends - I live just up the lane from where the cat is.

"We were walking back and I heard a cat crying. We looked around for it, in the bushes and everywhere, but we just couldn't see it. We could just hear this loud and pitiful cry."

Ms Skinner and her friends realised that the cat must have been stuck on a tree and called Royal Society for the Prevention of Cruelty to Animals (RSPCA), which arrived the next day when the cat had still not moved.

The charity arrived at the scene with fire services, but their attempts to rescue the cat - a female named "Cookie" - proved unsuccessful. Cookie only went further up the tree, probably scared.

In the meantime, Ms Skinner posted about the cat on Facebook and received an astonishing response. "I've had so many people ringing me and messaging me and offering to help," she said.

"We've now had two cherry pickers out trying to help, and people have tried to get her down with a fishing net and coax her down with food and treats.

"I just can't believe the reaction this has had. Who would have thought a little Facebook status would lead to all this? The whole of Tredegar has rallied round and seems to be behind this cat."

According to BBC, a scaffolding company saw the viral attention and built a structure around the tree to help the cat down.

Still, it took four days until Cookie agreed to be helped.

AP Scaffolding Services called the rescue mission a "community effort" on Facebook last Tuesday after the cat was finally brought down from the tree.

"From the cherry pickers, tree surgeon, the fire brigade, Gavin Townsend, Ryan Chislett, Brandon Gibbs, Jaydn Jackson and Pricey's Tree removal! Most importantly Leanne Skinner who never gave up, did everything she could and more to save the cat!" the company wrote.

What do you think of this rescue? Let us know using the comments section.