For this edition of the caption contest, Anand Mahindra shared a hilarious picture of a monkey sitting on a dish antenna. 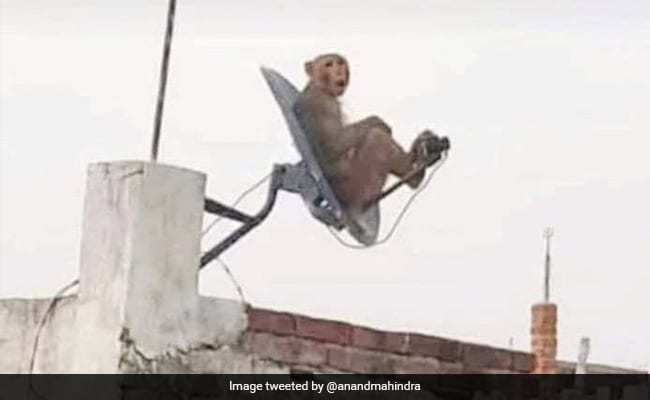 Businessman Anand Mahindra shared another installment of his well-known caption contest on Saturday, and the winners of the competition have now been announced. Mr Mahindra's caption contests are popular on Twitter, where the chairman of Mahindra Group has over 8.2 million followers. For this edition of the contest, Mr Mahindra, 65, shared a hilarious picture of a monkey sitting on a dish antenna, mouth open as if in surprise. "In times like these, I can't think of a better pic for my next caption competition," he wrote.

The caption contest went viral on the microblogging platform, receiving over 88,000 responses.

The rules of the contest were simple - think of a witty caption and win a scale model of a Mahindra vehicle. Like with most of his previous caption contests, Mr Mahindra chose two winners - one for Hindi and one for English.

He took to Twitter on Monday evening to announce the winning entries, congratulating
Twitter users '@vallisurya1' and '@TheSameWall' for their captions in Hindi and English respectively. The captions that won each of them a scale model of a Mahindra truck were "EK BANDAR.....TV ke ANDAR" and "DTH = Direct to Hanumanji".

"Announcing the winners of my most recent caption contest. Interestingly, they were also amongst the quickest to respond, even though it wasn't a 'fastest fingers first' contest!" wrote Anand Mahindra.

Announcing the winners of my most recent caption contest. Interestingly, they were also amongst the quickest to respond, even though it wasn't a ‘fastest fingers first' contest! Congratulations @vallisurya1@TheSameWall Please DM @MahindraRise to receive your scale model trucks! pic.twitter.com/0L5QIMRuIb

The monkey pic that Mr Mahindra tweeted received several eye-catching and hilarious captions, some of which the businessman had retweeted. Take a look at the other captions that caught his eye:

Trying to Channel my Inner Monkey.