Whale Jumps Out Of Water, Twirls In The Air In "Mind-Blowing" Video

"They came right up to us, and we thought we may have spooked them or something, but they dove right under our boat." 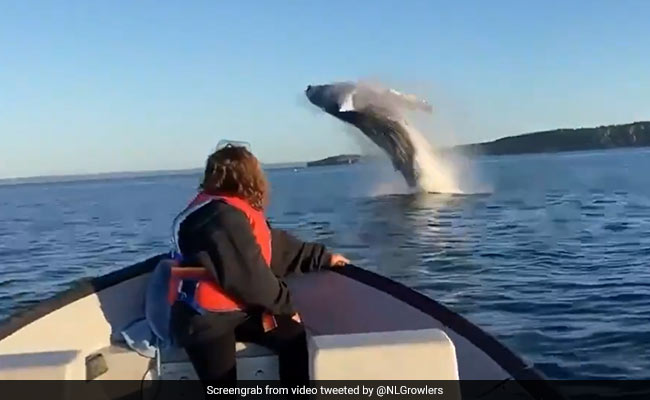 A humpback whale was filmed breaching in Newfoundland, Canada.

A father and daughter duo in Canada were stunned to see a humpback whale's magnificent breaching performance this Sunday. According to CBC News, Sean Russell and his 10-year-old daughter Sarah were cod fishing off Conception Bay in Newfoundland when they noticed two humpback whales swimming close to their boat. Mr Russell said that the whales had been feeding quietly before their behaviour changed.

"They came right up to us, and we thought we may have spooked them or something, but they dove right under our boat," he said shortly before he grabbed a camera and began filming.

Footage that has now gone viral on social media shows one of the whales jumping out of water and twirling in the air, followed shortly by the other one. Their performance elicited delighted reactions from Sarah and her father. "Mind blowing," the 10-year-old can be heard saying in the clip.

The video was first shared on Twitter by ice hockey team Newfoundland Growlers and later reposted by American basketball player Rex Chapman. "Most majestic video ever?" Mr Chapman asked his 9 lakh Twitter followers while sharing the clip - and many agreed that it was. Watch the video below:

Most majestic video ever?

Since being shared online two days ago, the video has garnered 2 million views on the microblogging platform, along with thousands of 'retweets' and comments.

"That first double twisty twirly jump series?! 10.0! all the medals & trophies for this whale," wrote one Twitter user.

"Her reaction. My goodness that is incredible," said another.

"It's not uncommon to have whales around the boat," Russell told Global News on Monday. "The whales are usually around and eating there, too," he said, adding that the breaching and twirling, however, was unexpected.