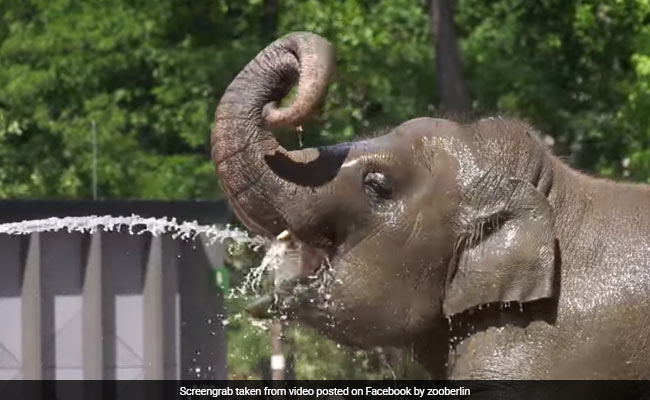 Elephants at the Berlin Zoo play with water as temperatures rise.

Large swathes of western and northern Europe will scorch this week with temperatures reaching up to 43 degrees Celsius. To mitigate the effects of the potentially dangerous heatwave, many countries have taken precautionary steps. France, for example, has extended opening hours for swimming pools and parks, while water bottles are being distributed in Milan. But it's not just humans who are feeling the hot weather, zoo animals in Europe are also getting creative while coming up with ways to beat the heat.

Euro News reports that at the Vienna Zoo, one innovative orangutan named Mota soaked her blanket in cold water before taking refuge from the sun under it.

According to zookeeper Fredi Maier, water is the best way for orangutans to keep cool. "Here they get water buckets but also hoses with holes in them so the water sprays like a garden hose. And they're loving it."

Meanwhile, elephants are the Berlin Zoo were also spotted playing and hosing themselves down with cold water, while the zoo's meerkats were given worm ice lollies to keep them cool.

BBC reports at at a Rome zoo, bears, coatis and lemurs were provided with blocks of frozen fruit to help them cope with the heat.

Caused by a plume of hot air from the Sahara, according to meteorologists, this early heatwave is the latest in a number of episodes of heat in recent years.