Watch What Happens When You Spin A Fidget Spinner In Space

An extremely fun experiment brought to you by NASA astronaut Randy Bresnik, who is currently aboard the International Space Station. 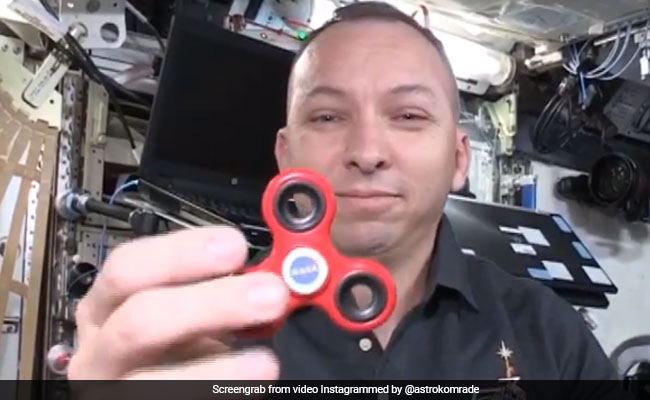 The International Space Station is probably the last place we thought we'd ever see a fidget spinner but, well, here we go. A fun video posted on social media by NASA's Randy Bresnik shows astronauts on the space station having the time of their lives playing with the popular toy. The video features several members of the space station crew taking turns playing with the fidget spinner (which sports a NASA logo) and performing impressive zero gravity flips and body rolls.

"A fidget spinner in space! How long does it spin? I'm not sure, but it's a great way to experiment with Newton's laws of motion," writes the astronaut on Instagram. "Allowing the fidget spinner to float reduces the bearing friction by permitting the rate of the central ring and outer spinner to equalize, and the whole thing spins as a unit."

There you go: astronauts proving once and for all science can be fun.

Netizens are loving the video, which has been watched over 45,000 times on Instagram and retweeted over 20,000 times on Twitter.

"Thank you for captivating kids all over the country! How cool are these astronauts?!" asks one person. "The human somersaulting had my son like 'meh' but the fidget spinner blew his mind," laughs another.

"I didn't know I wanted to see this until I saw it. Love it. Astronauts are cool. So cool," comments one person on the video. "We will forever be the generation that first sent a fidget spinner into space," jokes another.Click for more trending news