The pilot's skilled landing in the middle of a raging sandstorm in Saudi Arabia has impressed many on social media. 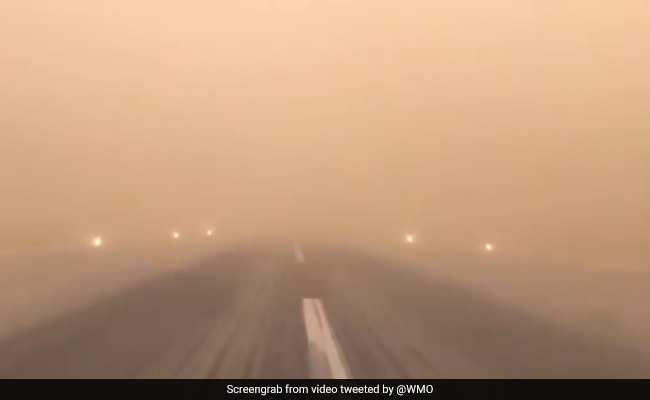 Scroll down to see thrilling footage of the difficult landing

A pilot's skilled landing in the middle of a raging sandstorm in Saudi Arabia has impressed Twitterati. Footage of the landing - which captures the runway slowly disappear in clouds of sand and dust - was tweeted by the World Meteorological Organization or WMO on Friday and been watched 23,500 times already.

The thrilling video, which has most likely been shot from the cockpit, begins with the plane approaching the runway in southern Saudi Arabia's Jazan airport. Though the runway is partially visible - the rest of it disappears in large clouds of sand and dust.

As the plane descends, visibility only gets worse. Seconds after its wheels hit the ground, the plane appears to be heading straight into a cloud of dust. In a haze of orange, all that is visible is the lighting on the edge of the runway.

Watch footage of the plane landing below:

REPOST to correct location. #Sand and #dust storms are impacting Arabian Gulf. Video via Nestor Santayana and @climatewithout borders of the approach to Jazan airport, southern Saudi Arabia, on Thursday. WMO sand and dust warning forecasts are issued by @Dust_Barcelonapic.twitter.com/QejizwFbTV

"Would not want to be there," comments one person on the video. "That's crazy! Nice landing," says another.

WMO also tweeted this video taken by a passenger that shows a plane flying past a large orange cloud of sand and dust somewhere above Saudi Arabia and neighbouring Kuwait.

Sand storm sweeps through Kuwait and Saudi Arabia. Via AbdulAziz and @CLIMATEwBORDERSpic.twitter.com/m3jxLVaECD

Promoted
Listen to the latest songs, only on JioSaavn.com
Earlier this year, a brave pilot attempted a dangerous landing during stormy conditions in Germany. A plane spotter filmed how the the pilot successfully maneuvered through the bad weather and managed to land safely at Dusseldorf Airport.

Last year, an Emirates Airbus A380 was caught on camera making a hard landing at the same airport. The A380 is the world's largest passenger plane, capable of seating more than 600 passengers.Click for more trending news