The video shows a woman cooking Maggi in milk, rose and Milkmaid 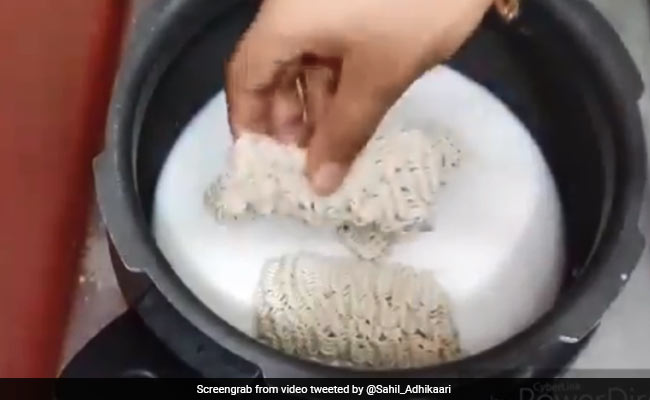 A video of Maggi being cooked in milk has led to a number of enraged comments on Twitter.

Whether it is gobbled down as a midnight snack or Instagrammed in the mountains, Maggi is a well-loved snack. Over the years, we have come up with many different versions of the 2-minute masala Maggi - from cheese Maggi to vegetable Maggi and more. But most of them have one thing in common - they're savoury. So when a Twitter user decided to share a recipe for sweet Maggi, cooked in milk, people had some very strong opinions.

On Thursday, a video posted to Twitter went quickly viral. The video shows a woman cooking Maggi in milk, rose and Milkmaid to prepare a sweet version of the popular snack. Watch it below:

Since being shared online, the video has collected more than 2.5 lakh views and dozens of comments. A lot of people couldn't wrap their heads around milk Maggi:

Indians - Let's make Halwa out of this

Can she send the those unused masala packets? I could use a bit of extra spice.

I started watching it and thought she'd be making pasta-like Maggie and then she added rose petals...got me curious. And then she added milk maid and I lost it and hence you shall be muted for posting such a pathetic recipe here ❤️

This is not the first time that chefs have come under fire for sharing unconventional recipes. In April, chef and TV personality Sanjeev Kapoor shared a recipe for Malabar Paneer - and was quickly reminded by Twitter that such a dish does not exist.

What do you think of Maggi cooked in milk? Let us know using the comments section.