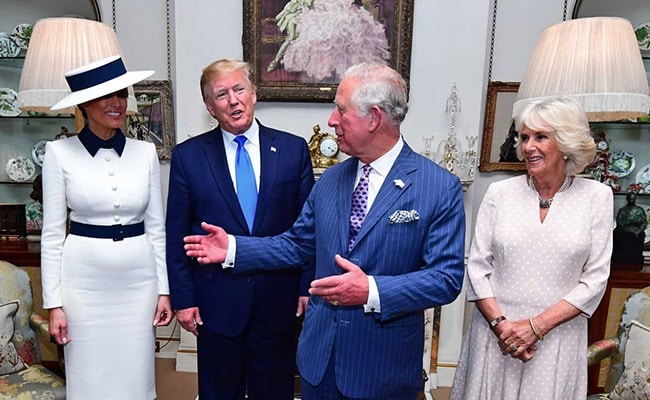 Prince Charles and Camilla, Duchess of Cornwall, hosted Donald and Melania Trump for tea on Monday evening. The meeting took place during the first day of Mr Trump's ongoing state visit to the UK. But as the royal couple welcomed Mr Trump and his wife into their elegant Clarence House sitting room, something unseemly on the floor caught everyone's eye. A media photographer's flash diffuser had dropped on the floor of the sitting room.

However, Prince Charles managed to turn the potentially embarrassing moment in front of his guests into a lighthearted one. A video that has been shared widely online shows him pick up the device and hand it back to the photographer, a huge smile on his face.

"It looks like an ice cream," joked the 70-year-old British royal to Donald Trump, who was seen all smiles during the meeting.

However, this wasn't the only thing during this tea that caught the media's attention. As the four prepared to move out of the room after their photo-op, Prince Charles' wife Camilla was seen winking at the cameras as the others turned around. The hilarious moment created quite a buzz on Twitter:

Camilla's wink is all sane people on earth pic.twitter.com/faVILp96Vd

Royal Protection Officer: “Camilla, if you are in trouble then wink, we will come and rescue you.” #TrumpUKVisit#TrumpVisitUKpic.twitter.com/TGMrXwmjUu

A wink is worth a thousand words and none of them nice. #Camilla#Trumppic.twitter.com/kcZJ9TkO6k

Donald Trump and his family are on a three-day state visit to the UK in order to commemorate the 75th anniversary of the Allied D Day landings.