Watch: Priest Raises Hand To Bless Little Girl. She High-Fives Him Instead

Over 2 million views for this adorable video. 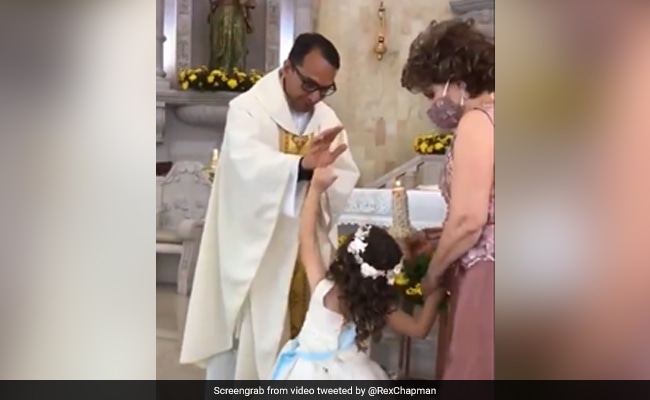 Screengrab from a video shared on Twitter by Rex Chapman.

A priest was left in stitches after he raised his hand to bless a little girl - and the gave him a high-five instead. The girl's innocent gesture has gone viral on social media and made millions of people smile. Chances are that it will leave you with a big smile on your face too.

Viral footage shows a little girl, dressed in a fancy white frock with flowers in her hair, standing in front of the priest. After reciting a prayer, the priest raises his hand to bless the girl. To his surprise and amusement, she puts up her own hand and high-fives him.

The hilarious video shows the priest covering his mouth to stifle his laughter as a woman standing next to the girl, possibly her mother, shakes her head in disbelief.

It is not clear where the video was filmed, but according to the Daily Mail, the priest was heard talking in Spanish. The video was first uploaded to TikTok and later shared on Twitter by former American basketball player Rex Chapman.

"Father is saying a blessing. The innocence of a child. They're trying not to laugh. Best thing you'll see today..." he wrote while sharing the footage.

Father is saying a blessing.

The innocence of a child.

They're trying not to laugh.

The video has been viewed over 2.3 million times on the microblogging platform, collecting hundreds of amused responses.

"Rule number one of high fives: never leave someone hanging," wrote one person.

"Seeing the world through the eyes of a child is a wonderful thing," another said.