The video showed a man risking his life by inching dangerously close to a crocodile and teasing the reptile repeatedly. 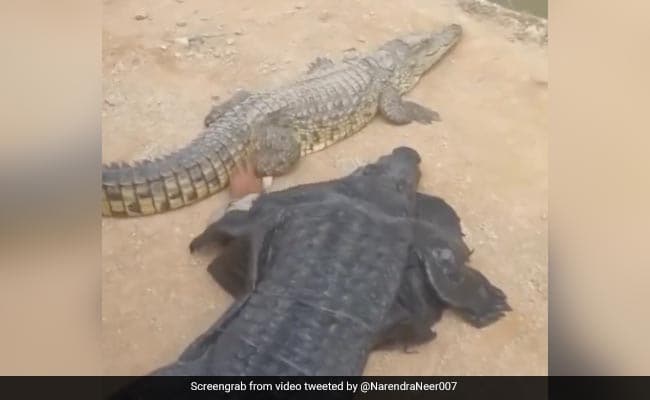 A video of a man teasing a real crocodile by wearing a crocodile costume is gaining traction on social media. The short clip was posted on Twitter by a user named Narendra Singh. It showed a man risking his life by inching dangerously close to a crocodile and teasing the reptile repeatedly.

"Kaunsa nasha kiye hai... (What drug did he take?)" the caption of the post read, which has accumulated hundreds of likes and comments.

The 10-second footage showed a man lying on the bank of a river, wearing a crooked crocodile costume. While the reptile was seen basking in the sun, the man was seen taking his hand out of the costume and pulling the crocodile's limb again and again.

The video, which has gone viral on several social media platforms, left internet users shocked. "The line between bravery and stupidity is very narrow," wrote one user. "Creative way to die," said another.

A third user commented, "All fun and games till the real one takes him to wander the waters." A fourth simply added, "Master in disguise."

Viral Video | A Bull Ran Amok At Wedding Ceremony, Here's How It Was Saved

Meanwhile, it is always advised to maintain a safe distance from crocodiles. There have been several instances in the past which showed time and again the dangers of venturing too close to the crocodile territory.

Earlier this year, a video of a 16-foot crocodile attacking a wildlife park employee in South Africa had gone viral online. The 660 kg beast attacked the zookeeper, Sean Le Clus, when he was sitting on the back of a crocodile in front of a group of tourists. The reptile penetrated its jaws around the left thigh of the zookeeper, who managed to survive the horrifying ordeal. The incident took place on September 10 at Crocodile Creek farm in the KwaZulu Natal province.