Watch: Huge King Cobra Pounces On Man As He Tries To Lift It

The clip has collected more than 5.6 million views on the social media platform so far. 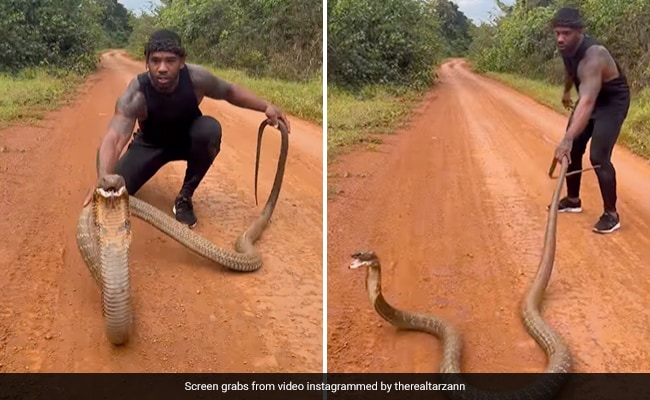 The man has a narrow escape on the video.

A man had a near-miss after a huge King Cobra pounced on him while he was trying to catch it with his bare hands. A chilling video of the incident has now gone viral online.

The video, which was posted on Instagram, opens with a man named Mike Holston holding the tail of a large King Cobra and trying to control it. The person attempts to lift the snake off the ground while the serpent looks alert with its hood spread wide. As soon as the man lifts the snake, it turns towards him and tries to attack. However, he escapes the attack narrowly, which could have ended really bad.

The clip has collected more than 5.6 million views on the social media platform so far. Many have expressed their concern for the man for handling such a ferocious snake, that too with his bare hands.

“You get bit by that it's game over,” one comment read.

Another said that the person was “playing with death” and that he could barely watch the video.

Adding some more details about the snake, Mike Holston, in the comment section, said that the snake was a 12-foot cobra which he found in a village. “12-foot cobra in the local village had to be relocated …he was full of ticks and had a spicy attitude…there's nothing like working with animals in their natural habitat,” he wrote.

Some were also appalled watching the snake getting manhandled. “Leave it alone,” one wrote.

Echoing a similar sentiment, another said that he should “leave the king alone”.

A few even vowed to never mess up with a snake like that. “Okay, I am definitely not picking this one up if you dare me,” one comment read.