Since being shared on November 12, the video has received over 48,000 likes and nearly 14,000 retweets. The video has been viewed more than three million times. 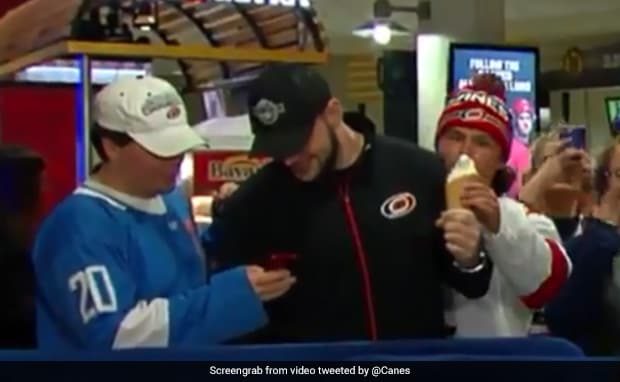 The theft has been dubbed the "crime of the century".

A man in the US was caught stealing ice cream during a live news report, in a hilarious video that has gone viral on social media and has gathered more than three million views on Twitter.

In the video, a Fox Sports reporter does his piece to camera during a live report on an ice hockey match, with fans cheering and waving in the background. Then, a man in the crowd slyly takes away an ice cream cone from the hand of another person who is busy talking to his friend and looking at his phone.

He takes a large bite of the ice cream and then tries to return it to the owner but decides to disappear into the crowd as the man realizes that his dessert is missing and begins looking around for the thief.

The viral video has been shared by ESPN and the Carolina Hurricanes, one of the teams playing the ice hockey match. "Crime of the century," they tweeted along with the viral video.

Crime of the Century pic.twitter.com/HcXOR6gn4r

Since being shared on November 12, the video has received over 48,000 likes and nearly 14,000 retweets. The video has been viewed more than three million times.

Twitter users had funny reactions to the video of the "crime". "The best part was that he was trying to put it back without being noticed," one Twitter user wrote. "Which is hilarious, while also being nasty lol. Imagine that dude getting it back and taking a lick," another user tweeted.