Watch: Drone Pilot In UK Captures Spectacular View From Above The Clouds

The video perfectly captured the temperature inversion at the summit of Mam Tor in the Peak District. 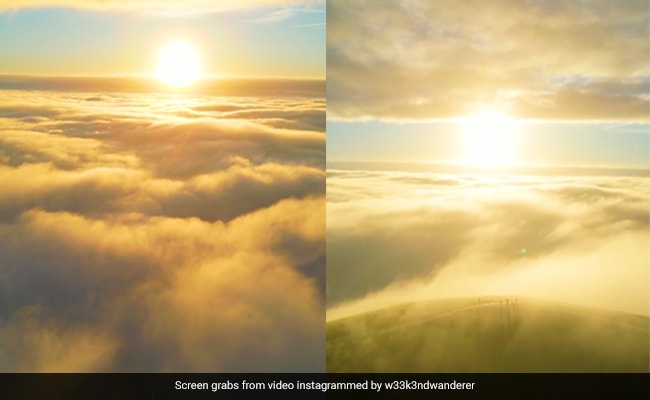 The video has garnered more than 2,500 views and hundreds of likes.

The video perfectly captured the temperature inversion at the summit of Mam Tor in the Peak District. As per The Met Office, UK's national weather service, temperature inversions, or cloud inversions, are most common in winter. It happens when warm and cold air flip upside down. So a cold layer of air is trapped under a layer of warmer air, creating a low blanket of mist and cloud on the ground. This can create a beautiful sight for people looking down from high places like hills.

Speaking to the BBC, Mr Varndell said that he and his partner climbed the hill at 7:30 in the morning the waited for the sun to rise. He said that he was left speechless after capturing the video.

"It was absolutely spectacular," Mr Varndell said, adding, "Moments like these are special. Mother nature has so much to offer and the Peak District has an abundance of beautiful scenery".

Meanwhile, on Instagram, netizens were spellbound by the video. "That's bloody insane footage mate," one user said. "What a spectacular image," said another.

A third commented, "Magnifique." A fourth added, "Wowwww! Fantastic. What a wonderful view."

The video has garnered more than 2,500 views and hundreds of likes.

Meanwhile speaking of stunning video, previously a time-lapse video of a night sky had taken the internet by storm. The photographer created the video by using a star tracker with his camera. The optical device rotates the camera at the same speed as the Earth, but in the opposite direction. It has the visual effect of stabilising the sky.