The skydivers - Luke Aikins and Andy Farrington, who were part of the Red Bull Air Force Aviation crew - were safe and no injuries were reported. 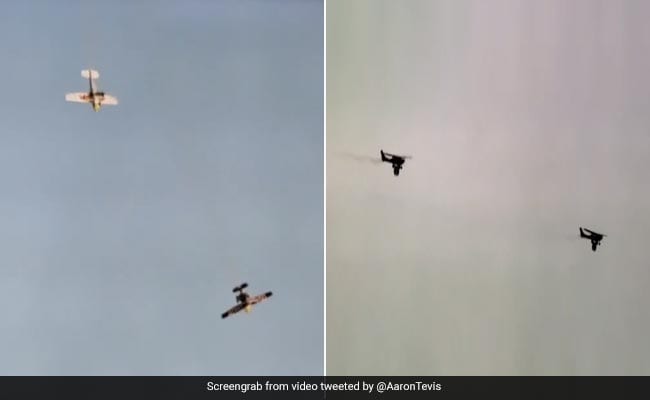 Now, Red Bull is facing an investigation by the Federal Aviation Administration.

The first-of-its-kind mid-air “plane swap”, attempted by two stunt pilots on Sunday, was unsuccessful after one of the two aircraft involved spiralled out of control and crash-landed in Arizona, US. According to New York Post, the skydivers - cousins Luke Aikins and Andy Farrington, who were part of the Red Bull Air Force Aviation crew - were safe and no injuries were reported.

The pilots were trying to jump into each other's planes while in mid-air - leaving both aircrafts unmanned. On its website, Red Bull had said that the skydivers would attempt to switch as they dove toward the ground. However, things backfired in the skies, sending one plane into a tailspin before crashing to the ground in Arizona.

This #RedBull#PlaneSwap in Arizona was crazy! Didn't go as planned but luckily everyone is alright! pic.twitter.com/f9cpRclYtT

The stunt literally went south for the Red Bull-sponsored flights. The two pilots had planned to pitch their Cessna 182 planes into a synchronised nosedive at 14,000 feet by stopping the engines and a custom-manufactured airbrake holding the planes in a controlled-descent speed of 140 mph. As part of the plan, the pilots were supposed to then exit their respective aircraft and skydive into each other's planes, crossing over each other mid-air and regaining control in under one minute.

Viral Video | YouTuber Deliberately Crashed His Plane So He Could Record A Video, FAA Says: Report

However, the plane Mr Farrington was jumping into quickly began spiralling out of control into a downward tailspin, becoming extremely inconsistent with the other plane's altitude after the duo made their jumps. Mr Farrington was forced to parachute to the ground as his plane plummeted. Mr Aikins, on the other hand, managed to successfully complete the stunt into his respective plane.

Me before drinking a @redbull ➡️ Me After drinking a #Redbull#PlaneSwappic.twitter.com/HtrlytScbK

As per the Post, after reaching the ground, Mr Farrington said, “All the numbers matched up and everything like that.” He added, “Everything should have been good to go, for some reason, it wasn't that way but at the end of the day we're both here, we're both good to go, everybody's safe and sound and I guess that's the important part.”

Meanwhile, according to NBC News, Red Bull is facing an investigation by the Federal Aviation Administration (FAA). The officials said that the agency had denied a request on Friday from the company to get an exemption from regulations that cover the safe operation of aircraft. Now, the two pilots could potentially be grounded, pay fines or lose their licenses as a result of the FAA investigation.