The one-of-a- kind tribute was filmed across 18 Indian cities, USA, and Malaysia. 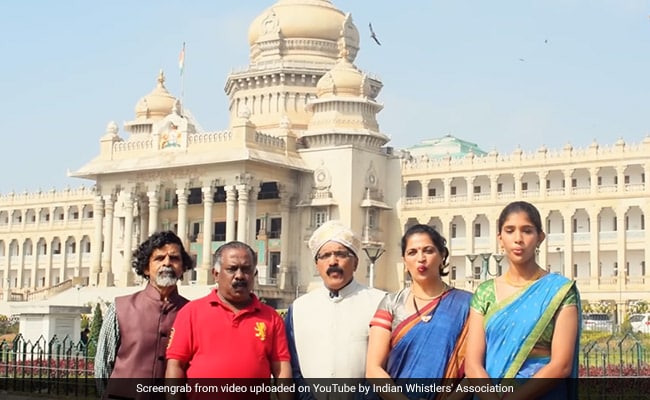 A still from a video shared by Indian Whistlers' Association.

An iconic song, over three decades old, has been recreated with a unique twist by 50 Indians across the globe. To celebrate the 71st Republic Day, 50 members of the Indian Whistlers' Association (IWA) whistled the song Mile Sur Mera Tumhara.

The one-of-a- kind tribute was filmed across 18 Indian cities, USA, and Malaysia, and the six-minute-and-11-second-long video released by IWA on the eve of Republic Day.

"We bring to you MSMT 2020, featuring 50 Indians from 17 ethnicities and 18 cities in India and abroad - united by one artform - Whistling, thus transcending the  diversities in language, ethnicity or religion," they wrote while sharing the Mile Sur Mera Tumhara tribute on YouTube.

The video has been viewed over 83,000 times on the video-sharing platform, collecting hundreds of compliments.

"Folks what a wonderful performance!!" wrote one person in the comments section. "This is outstanding," another said.

What if we talked less and whistled more! 50 whistlers from the Indian Whistlers' Association take you across India and the World with a melodious tribute to this beloved land! 🇮🇳 #WhistlePodu 🦁💛https://t.co/TM6Pg8dPPY

The message of unity in Mile Sur Mera Tumhara was conveyed not only through lyrics, but also the personalities who featured in the video. Amitabh Bachchan, Shabana Azmi, Mallika Sarabhai, Hema Malini, Kamal Haasan, Tanuja and Javed Akhtar featured in the song as part of a list that represented every part of the country.

Listen to the original melody below:

What do you think of IWA's tribute? Let us know using the comments section.